Solving several complicated problems in the construction of the transmission lines, NEA MD Kulman Ghising has made a move to address another problem in Dharan 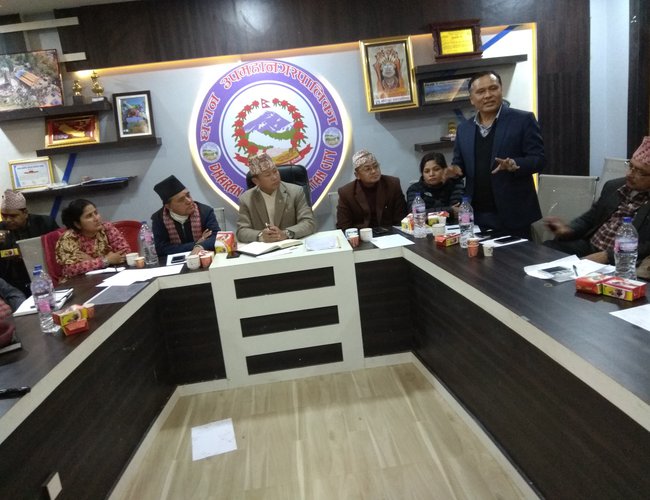 As several hydropower projects are under construction and some of them are at the final stage of completion in Kosi river basin, the delay in the construction of the transmission line will create problems in evacuating the energy. As the government has already signed an agreement guaranteeing to evacuate all the energy from plants, any delay in the completion of the transmission line will add extra burden to the government.

A working committee is constituted to identify the problem and solve the issue related to the problems that appeared in Ward 20 of Dharan Sub-metropolitan regarding the Kosi Transmission Line Project.

A stakeholders meeting held in the presence of the Chief Minister of Province 1 Sherdhan Rai constituted the committee under the coordination of the Chief District Officer of Sunsari, Om Prakash Uprety,

As the government has announced an ambitious plan to generate 10,000 MW power by ten years, the current trend to create obstructions in the construction of transmission lines in different parts of Nepal have shown that evacuation of power is going to be a major hurdle for future.

Facing the obstruction in the construction of transmission line in different parts of the country, one of the major headaches for NEA MD Ghising now is how to evacuate the energy generated in different areas of Nepal.

After a hectic meeting in Dharan in the presence of Chief Minister of Province No 1 Sherdhan Rai, Deputy Mayor of Dharan Sub-municipality and other local people, a task force, which is under the convenorship of Chief District officer with Ward Chair, Project Director, Engineer of Municipality, Concerned Group, Contractor, consultant and a member each from the political parties, has been assigned to present a report within a week to the chief minister.

The problem appeared following the request by the sub-municipality to change the current transmission line 200 meters west arguing that the present construction route will affect the proposed tourism area directly and indirectly. After this decision, the construction of the tower has stopped. However, NEA has been arguing that changing the current route will delay the project as well as increasing the cost.

At the initiation of the chief minister, speaker of the provincial assembly and members, the team visited the obstructed site.

Addressing the meeting, chief minister Rai said that the Kosi Corridor Transmission Line is the main pillar to develop hydropower potential in the province and suggested concerned stakeholders should not to create unnecessary hurdles to obstruct the construction. “Talk about what we can provide to the people who are affected by transmission line, but don’t disturb the construction,” said Rai.

Acting mayor Manju Bhandary said that the municipality is not anti-development and anti-transmission line. “Let’s constitute a technical committee and start the work with its suggestions.”

Municipality is arguing that the construction of transmission line from proposed areas will affect its plan to make the areas as tourism spots, including sky gliding, botanical park, British Gorkha Memorial and so on.

Nepal Electricity Authority (NEA) is insisting that the present route was made following an approval from the municipality. The construction of transmission line will not affect the proposed tourism area.

Expressing his anger over unnecessary pressure, NEA MD Kulman Ghising said there are obstructions everywhere in the construction of transmission lines. He said that such obstructions are affecting the work. “People have even opposed when we tried to install transmission tower in the middle of a river. Suggest to us where can we go now?

For Hetauda-Dhalkebar-Inarua 400 KV Transmission line, there is the need to install 7 towers in Kosi river, digging 40 meters. It is going to be a risky work. We cannot construct towers in the sky, Ghising said.

MD Ghising said it is impossible to change the route of transmission line proposed by Dharan Sub-municipality. “We have addressed all the concerns and the construction will not affect Dharan Municipality’s work. If we change the route one after another, it will affect the construction of transmission line throughout the country. “We are ready to give social and economic compensations to the affected people. Don’t enter in technical issue.”

With a concessional loan from Indian Exim Bank, Nepal government and NEA, Kosi Transmission line will connect hydropower generated in Bhojpur, Sankuwasabha, Terathum and Tapelejung to national grid. NEA has already signed PPA with 28 projects with generating capacity of 516 in the region.

Energy Secretary Ghimire Discusses Issues of Electricity With His Counterparts From India, Bangladesh and Bhutan By NEW SPOTLIGHT ONLINE 2 months, 2 weeks ago