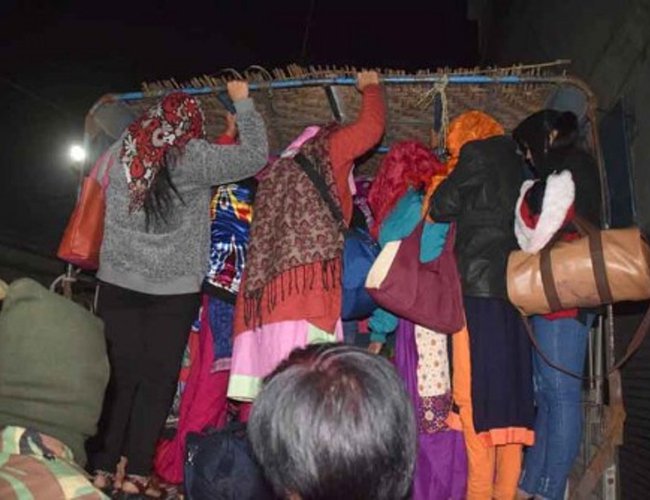 Nepal Police in collaboration with Manipur police and BSF have rescued 179 Nepalese men and women from being trafficked. According to Central News Bulletin go Nepal Police, Indian police rescued these women from Moreh, Manipur who were being trafficked into Myanmar through Moreh, which falls along the India-Myanmar border.

According to Indian media quoting Indian police sources, while they were able to rescue 107 women, more than 60 had already been trafficked to Myanmar through the same route between January 29 to 30.

Chairman of Maiti Nepal, Bishwa Ram Khadka, told the press that “Manipur police rescued 107 women in coordination with Impulse NGO Network after the Maiti Nepal provided the information that they were being trafficked in the wee hours on February 1.” As per sources, the Moreh border is increasingly being used by traffickers to move girls from Nepal to Myanmar via India. From Myanmar, the rescued batch of 107 were reportedly being taken to Iraq. Most of these girls are reportedly between 19 to 31 years of age.

On January 30, the Delhi Commission for Women had rescued six Nepalese girls who were brought to India from Nepal. The girls are presently under the custody of the Delhi police and their statements have been recorded at the Bhalswa Dairy station .

East Mojo has quoted, Jogesh Chandra, SP, Imphal West, “It is difficult to give you the exact number of victims and traffickers arrested because the operation is still on. We have been receiving information from our intelligence network, and we cannot divulge any further details. We are currently working to bust the network of traffickers responsible for this.”

Meanwhile, 33 more girls have been rescued from the Bir Tikendrajit International Airport in Imphal and another 21 from the border town of Moreh on Saturday. This takes the total number of girls rescued to 161, said sources.

Nepal Police with support from Indian Police rescued 179 Nepalese suspected to be in trafficking from Indian state of Manipur. Those included 32 male and 147 female Imphal of Manipur State of India.

Police believed that they were on the way to trafficking to Myanmar. According to Nepal Police, the government is making necessary legal efforts to bring back those rescued from Imphal.