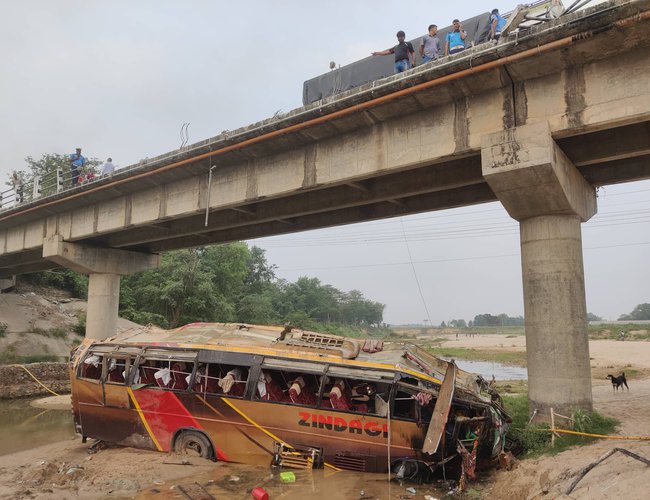 A total of 2,883 individuals died and 7,282 others were severely injured in around 24,526 road accidents across the country during the last fiscal year 2021/22 reports The Rising Nepal.

According to daily, the Nepal Police Mirror 2022, released on October 17 by Nepal Police Headquarters, shows that 25,722 individuals sustained minor injuries in the accidents.

Similarly, data from Nepal Police shows that the number of accidents and fatalities have been increasing over the years.

Officers argued that the rise in number of accidents was mainly because of the negligence from drivers as well as passengers, with most accidents taking place during day time – between 12 pm and 6 pm.

Among a total of 32,285 awareness programmes organised by Nepal Police in 2021/22, many were associated with traffic awareness, officers informed.

Alongside awareness campaigns, officers stressed that they have intensified surveillance against traffic rule violators as well.

Nepal Police argued that road accidents can be minimised only with the collective response to improve multi-modal road safety laws, policies and procedures, the construction of safer roads, the encouragement to use of safer vehicles, raising safety awareness among the road users and enhancement of post-crash response.

Nevertheless, Nepal Police, in its 2022’s mirror, stressed that the authority vested on traffic police was extremely limited to pursue the goals of road safety.

Meanwhile, our Sunsari Correspondent informed that 17 individuals died in different road accidents across Province 1 during the five days of Tihar festival. Similarly, 17 others were seriously injured and 163 sustained minor injuries. During the day of Bhai Tika on October 27, 23 accidents were recorded from across the province said The Rising Nepal.