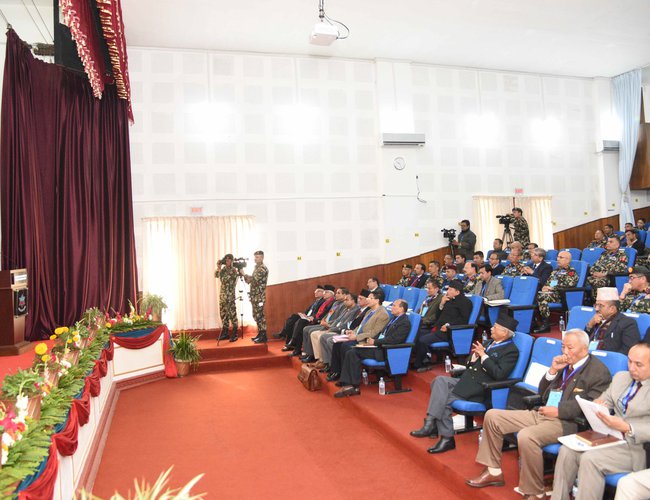 For Nepal Army, their experiences are sound enough to highlight the importance of civil military relations. With the promulgation of the new constitution, new criteria have come into the fore for Nepal Army to be in greater civilian control.

Given so many issues in the present context of civil military relations, Nepal Army organized a day long workshop with the participation of various stakeholders.

“Let me also appreciate the initiative being taken by Army Command and Staff College over the years for organizing seminars on areas of interests to the security forces, political authority, government officials and general public. In the meantime, I also acknowledge the invaluable efforts put in by the academia to make the seminar both lively and fruitful,” said COAS General Purna Chandra Thapa.

Militaries of the world have their own special constitutional and legal privileges, different from the other organizations. As an organization which requires obedience, loyalty, sacrifice and discipline to maintain command and control, Army needs some different sets of rule.

However, in the name of making it under civilian control, some efforts are going on to hit the basic essence and fundamentals of Nepal Army. If Nepal Army follows the recent interpretation of Supreme Court on jurisdiction of Military Court, Nepal Army’s command and control will be jeopardized.

Organized by Nepal Army’s Command and Staff College and inaugurated by Deputy Prime Minister and Minister of Defense Ishwor Pokharel, the one day workshop on “Civil Military Relation: In Present Socio-Political Environment of Nepal, was the country’s first of its kind which discussed all concepts of civil military relations.

Major General Ishwor Hamal, who is also Registrar of Army Command and Staff College, highlighted the importance of the workshop in the changed context.

Be it the construction of a road or during disaster like major earthquakes of 2015, Nepal Army has been in constant touch with civilians and it has a long tradition of working under the civilian authority.

Since its formation by its founder Prithvi Narayan Shah the great, Nepal Army’s base has been at the people level.

“The seminar would be rewarding not only in broadening our understanding but also in devising guidelines, policies, and mechanisms for ideal civil military relations,” said COAS General Thapa.