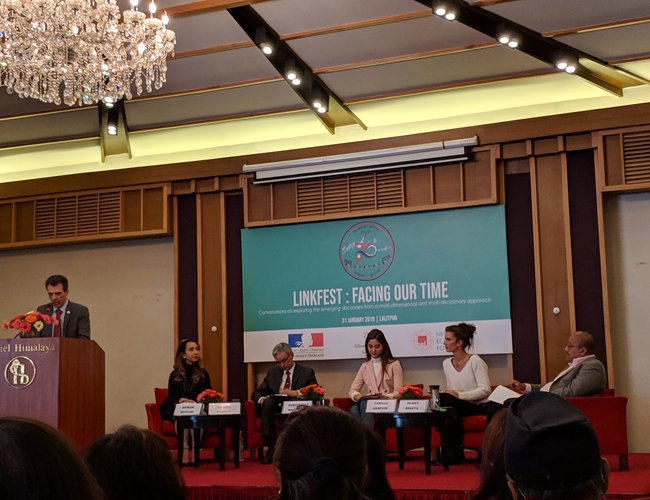 Although Sylvain Levy encountered a number of people during his visit to Nepal in 1901, he described the level of Nepali intellectual base that has not changed much even 118 years later.

In his diary, the French historian mentioned so many Nepali scholars having not much depth in Sanskrit, history and culture of Nepal but hailed the place as a most important place in the region. He made certain harsh remarks about the intellectual level of Kathmandu valley that has not gone up much further than his description.

Even after 118 years, Nepali youths are talking about the need to have education institutions with high quality to enhance the base of intellectual levels required to make progress.

Jointly organized by French Embassy in Nepal, Nepal Economic Forum and the Alliance Française, a debate on “Facing our Time,” brought four panelists with their own personal influences and experiences to express the confidence that Nepal will move for betterment.

All three Nepali panelists Arnico Panday, Shiwani Neupane and Shrinkhala Khatiwada stressed the need to have more education institutions with high quality to make a change in the country.

Although Miss Nepal Shrinkhala Khatiwada, an engineering graduate, reached the top 15 at the Miss World Champion, she lost the opportunity to grab the title because she replied her answers in a general way rather than going on a thematic basis.

Compared to her competitors in the final round, a smart, beautiful and strong personality like Khatiwada was weak in explaining her mission and vision in a thematic way. Miss Nepal Khatiwada has accepted this fact.

Khatiwada is a goodwill Ambassador for the 70th anniversary of the establishment of diplomatic relations between Nepal and France and Miss Nepal World 2018, cited upon the merits as well as the demerits of social media. Khatiwada reflected on how the media has the power to influence a society and noted that in today’s era where viral news gains more popularity than important government policies, it is important to raise awareness to create optimism regarding the growth of the country and also raise hope in people.

Other speakers on the dias, French national Camille Hanesse also agreed that the creation comes from strong intellectual depth and it requires high level of education.

French ambassador to Nepal François – Xavier Leger said this year 2019 is a very special year because we are celebrating 70 years of diplomatic relation between Nepal and France. Addressing the debate on facing our Time, he said that the embassy will be organizing a series of events all along the year.

Moderated by Sujeev Shakya, Chairperson of Nepal Economic Forum, the floor was open to various questions regarding Nepal’s current problems and prospects for the future.

Nepal has enormous opportunities to grow but enormous challenges ahead as well. This is what the four panelists taking part in the discussion program concluded. Each panelist had different views on how to address challenges.

Addressing the debate Pandey stressed climate change was the major issue of our time. He talked about how the narrative of climate change has been clearer with recent assessments. Arnico marked that with accelerating activities and consumerism, we have limited time to stabilize the climate. “Therefore, a major switch is needed in our energy consumption and behavior pattern, which can be a major business opportunity for emerging ventures,” said Panday, an Atmospheric Scientist. Currently, he is Regional Programme Manager of ICIMOD’s Atmosphere Program.

Neupane, a Journalist, Entrepreneur and Novelist from Nepal, who worked full time as Director of Ambe Group Nepal and currently headed the Conglomerate’s instant noodle division, said while reflecting upon the times where social media perpetuates hopelessness underscored that this culture of hopelessness is what promotes the trend of migration in the country. She noted that Nepal needs to be seen as a rich and booming economy and rather than seeing as a country of despair. Regarding the environment of entrepreneurship in Nepal, Neupane marked that incubation and innovation should be backed by government policies.

Published between 1905-98, History of Nepal was the first book written by a European from continental Europe. Sylvain Levi was convinced of importance of Nepal in Asian history regarded it as is one of the crossroads where South, Central and East Asian influences met and combined.

As Nepal and France are celebrating seventy years of establishment of diplomatic relations, the contributions made by French historian scholar, Sylvain Levi, to popularise Nepal in continental Europe was remarkable.

At the same time, the level of Nepal's intellectual is not too different from what he described almost 118 years ago. Frequent discussions, however, will change the situation.