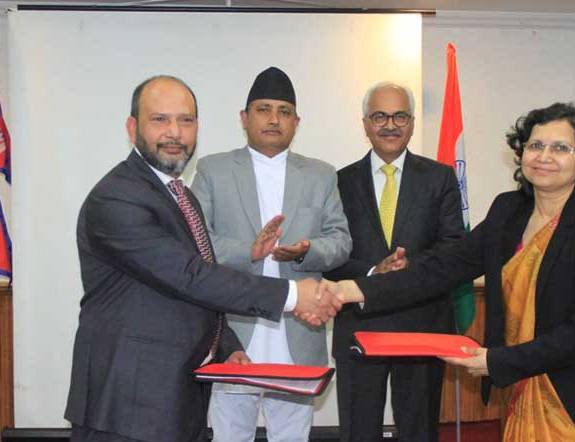 For Nepali officials who have been taking part in the negotiations with India on water resources for long, the recently concluded meetings of India-Nepal Joint Committee on Water Resources (JCWR) and Joint Steering Committee (JSC) New Delhi and Pokhara gave different indications.

With prolonged disputes on modality of sharing water resources, Nepal-India water resources negotiations used to conclude with nice words for future development. These two meetings concluded with certain directions and listing the priorities for the future cooperation.

Although the trust deficit between the two countries is yet to be bridged, the progress in resolving certain issues and forwarding new venues for future cooperation is remarkable changes.

Attaching so much of sentimental issues with water sharing, Nepali officials used to present their views with suspicious attitudes towards neighbors and undermining the genuine concern of lower riparian in the exploitation of water resources.

At a time when Nepal Communist Party, which has thrived on anti-India plank, particularly harping anti-Kosi, anti-Gandak and other agreements, is in power, no one can guarantee Nepal's behavior.

Inheriting the old mindset of looking at neighbors’ proposals and intentions with suspicion, Nepali officials always start the negotiations with sentiment and individual interest rather than the reality.

Nepal-India water resource issues are natural in the form, but complex in the negotiations at the political level. All the big rivers like Gandaki, Kosi, Karnali and Mahakali, which drain out from Nepal to India, originate in Tibet. However, there are many other rivers which originate in Nepal and have very nominal water during lean season and high volume of water during the rainy season.

At the people’s level, waters are life, for sustaining the life, and making them prosperous. Thus states have natural concerns to manage the water. Moreover, with water consumption in the upper level, less water will be available downstream. With more rainfall upstream, devastating floods occur downstream.

As the nature of the rivers are different, they have complex dimensions. From flood to irrigation and energy, each river needs to be dealt with differently in the use of water resources.

With such complex relations of water, there is the need of a cohesive understanding and cooperative attitude in sharing the water resources between Nepal and India. Nepalese officials need to understand India's genuine concern and India too needs to understand Nepal's concern.

If Nepal insists to build water resources for the benefit of its own farmers, ignoring the farmers living on the other side of the border, it is natural to see resistance from other side and move water cooperation to a standstill.

As long as negotiations conducted on the basis of political boundary and sovereignty, ignoring the people using the water, nothing can be achieved. For decades, negotiations started on sentiments have shown no tangible progress.

Something seems to be moving slightly differently. In the eighth meeting of India-Nepal Joint Committee on Water Resources (JCWR), which was held in New Delhi on January 11, both the countries extensively discussed issues related to water sharing. Led by two secretaries from Nepal and India, both the delegations broadly discussed the issues of major projects including DPR of Pancheshwor.

The Indian team leader expressed that extensive deliberations have taken place in the meeting and satisfactory outcomes have been achieved on Tanakpur-Mahendranagar link canal, link road, Kosi Gandak Projects, flooding and inundation related issues. He expressed that there is a need to accelerate work on areas like finalization of the DPR of Pancheswar Multipurpose Project, preparation of DPR of Sapta Kosi High dam Mulitipurpose Project and Sun Kosi Storage-cum Diversion Scheme and on flood forecasting activities.

In the joint press release, Indian team leader said that this meeting of JCWR was taking place after a gap of over five years. "Despite the long gap between the meetings, considerable progress has been achieved during these years on issues of mutual interest in the bilateral water resources cooperation," said Indian secretary.

Nepali team leader highlighted that this meeting is an opportunity to renew the bilateral commitment in fostering cooperation in water resources between the two countries. "There is a need to treat water holistically considering an integrated water resource management framework and that Nepal's engagement with India comes as an important dimension in this framework. JCWR has the responsibility to translate the political will and commitment to advance the continued cooperation between the two countries in the area of water resources," said Dr. Sanjaya Sharma, secretary, Ministry of Energy, Water Resources and Irrigation.

He stressed the need to utilize the advantage of strong people-to-people relations between the two countries to further consolidate this cooperation.

Out of all the decisions, the endorsement of JSTC's decision to hold the meeting between the nodal officers of the project from India and Nepal finalize the canal joining modalities within a month was a major milestone.

Five years ago, Nepali leader taking part in JCWR meeting rejected to endorse JSTC's recommendation saying that it is not acceptable to Nepal. According to a Nepali member of delegation at that time then secretary declined to endorse consultations with political leaders in Nepal. "It was one of the most unfortunate parts of Nepal when a non-technical secretary outrightly rejected the JSTC's recommendation without understanding the technical benefits to Nepal."

"He acted on sentimental and political slogans rather than the technical advice. After five years, we are finalizing the same report. Had we endorsed the document, Nepal would have gained much benefit," said an official on condition of anonymity.

They also discussed cooperation on flooding, inundation and erosion issues, review of on-going works on Lalbakiya, Bagmati and Kamala Rivers, taking up river training works in other rivers flowing from Nepal to India and inundation issues along India-Nepal border.

As Nepal-India concluded the meeting issuing the statement, what is required is to deal with water resources issues between the two countries not on sentiment but on reality with some give and take.

After years of efforts, Nepal and India agreed to set up institutions for energy banking.

“Now the road to energy banking has opened,” said Aryal. This is a major achievement for us as it will address our concern to sell energy as part the cost of energy.”

After this approval, energy banking will start from Dhalkebar-Mujffarpur 400 kV Cross Border Transmission line. Nepal Electricity Authority has already signed PPA with the projects with capacity of 2500 MW run of the river and 2500 MW Peaking Projects.

After the completion of these projects, almost 2500 MW energy generated by peaking projects would go waste. However, this agreement saves NEA Rs.84 billion. The meeting also agreed to install 50 MVA transfer in Tanakpur and India to provide additional 80 MW power. This will solve the power crisis of far-western province. Currently, Nepal is importing 30 to 35 MW energy from India through Tanakpur.

India also agreed to support Nepal to enhance the capacity of 132 kV Raxaul-Parwanipur and Kataiya Kusaha Transmission line to end the electricity fluctuations in the region. Currently, Nepal is importing 50 MW each from both the transmission lines.

As per the demand of Nepal, India has agreed to construct 132 kV Kohalpur Nanpara Transmission line on India’s grant. However, both the countries have agreed to further discussion on New Butwal Gorakhpur 400 kV cross border transmission line.

With such a long time of misunderstanding and suspicion, Nepal and India have made certain progress when their work was driven by technical reason rather than the sentiments.