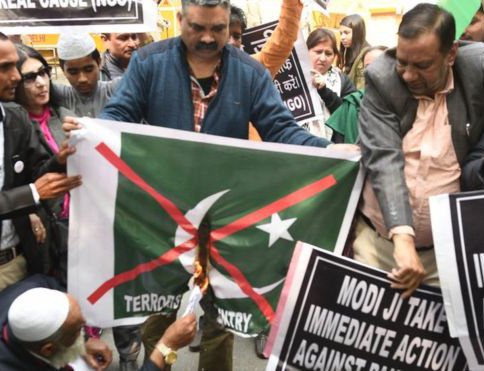 Kashmiri Muslims are being warned to stay vigilant, amid reports of threats and intimidation after last week's deadly attack on Indian forces.

Isolated incidents of students from Kashmir being beaten up or evicted from their accommodation in northern Indian states were reported in local media.

The suicide attack killed 46 troops, the deadliest in Kashmir for decades.

The bomber used a vehicle packed with explosives to ram a convoy of 78 buses carrying Indian security forces on the heavily guarded Srinagar-Jammu highway about 20km (12 miles) from the capital, Srinagar.

Pakistan-based militant group Jaish-e-Mohammad has said it carried out the attack and India has accused Pakistan of even having a hand in it - an allegation Islamabad firmly denies.

The heavy death toll shocked many across the country and led the Indian government to say it would begin its retaliation by "completely isolating" Pakistan diplomatically.

Both India and Pakistan claim all of Muslim-majority Kashmir but control only parts of it.

Recent reports emerging from northern India point to several incidents of Kashmiri students being targeted by a furious public. Most of the instances were centred around the northern states of Haryana and Uttarakhand.

According to the Times of India, 20 Kashmiri girls in the Indian city of Dehradun were forced to lock themselves in their hostel rooms until police arrived.

One girl said they were "so scared that we were not able to open our room or to go out to have any food".

Some local media outlets have reported that students were forced to leave Indian towns in which they were studying due to fear of violence.

Many members of the Indian public also expressed sympathy towards the Kashmiri students on social media, with some offering to open up their doors to them.

While offering assistance to Kashmiri people who felt threatened, India's Central Reserve Police Force (CRPF) also said that "fake news about harassment of students from Kashmir is being propagated by various miscreants on social media".

Several pictures and videos allegedly showing injured Indian soldiers after the suicide attack being widely shared across social media. Most of these images are graphic and show soldiers covered in blood.

Some the messages shared along with these pictures encourage people to seek revenge for the attack. The comments on these pictures are thousands in numbers, and most of those are asking the government to "attack Pakistan".

The CRPF also issued an advisory against "fake pictures" and requested people not to share them.

India has already imposed a swathe of economic measures on Pakistan after the attack, including revoking Most Favoured Nation trading status and raising customs duty to 200%