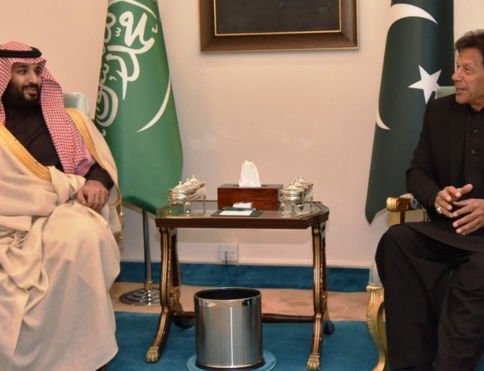 Saudi Arabia has signed investment deals worth $20bn (£15.5bn) with Pakistan, as the south Asian country looks to bolster its fragile economy.

It comes as part of a high-profile Asian tour by the kingdom's Crown Prince Mohammed bin Salman.

Pakistan urgently needs to address a balance of payments crisis and is looking to international backers for support.

The deals include an $8bn oil refinery in the key port city of Gwadar.

Other agreements centred on the energy and mining sector, according to reports.

"It's big for phase one, and definitely it will grow every month and every year, and it will be beneficial to both countries," the crown prince said.

Pakistan is desperate for cash. The central bank has only $8bn left in foreign reserves and faces a balance of payments crisis.

Prime Minister Imran Khan has been seeking help from friendly countries in order to cut the size of the bailout package his country is likely to need from the International Monetary Fund, under very strict conditions.

The country is seeking its 13th bailout since the late 1980s and Saudi Arabia has already provided a $6bn loan.

Pakistan is the first stop on an Asian tour by the crown prince, known as MBS, ahead of scheduled visits to China and India.

The prince is seeking to recast his international image in the wake of the Jamal Khashoggi affair. The journalist was murdered at the Saudi consulate in Istanbul in October.

Against this backdrop, the current tour can be seen as a charm offensive by MBS, who is seeking to bolster relationships with dependable allies as he doles out cash, says the BBC's Abid Hussain.

While Pakistan stands to benefit from Saudi Arabia's largesse, the south Asian country is also important to the kingdom.

The two countries have a long-standing military relationship and the MBS visit comes at a time when geopolitics in the region are shifting - including concerns over the influence of Iran.