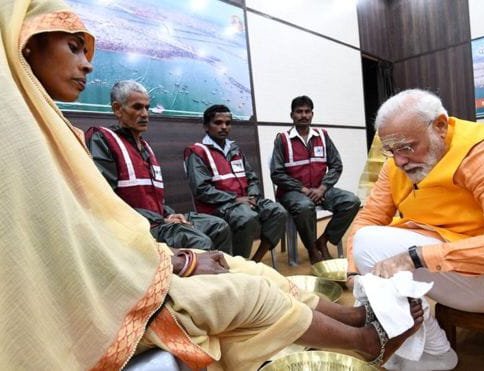 Prime Minister Narendra Modi took a dip at the Sangam and offered prayers during his visit to Prayagraj in Uttar Pradesh on Sunday.

Later he said the moment of washing the sanitation workers’ feet “will stay with me forever”.

“It was a big responsibility to keep clean an area where 20-22 crore people had gathered. You have proved there is nothing impossible in the world. I salute each and every person making a contribution towards a Swachh Bharat,” he said.

Earlier, dressed in an orange kurta and wrapped in a saffron shawl, the Prime Minister participated in the ‘Triveni Puja’ conducted by a group of priests. He offered milk, fruits, a red sari and chandan to the holy rivers.

Amid the chanting of hymns, Modi also did a brief ‘Sankalp’ for which he later offered some ‘dakshina’ to the priests.

He later performed the ‘aarti’ and interacted with the priests who conducted the puja.

A sacred thread was tied to his right wrist as a symbol of the blessings that come from propitiating the holy rivers.

Earlier, he arrived in Prayagraj in a special Indian Air Force (IAF) chopper.

He was received by Adityanath, Uttar Pradesh Health Minister Sidharth Nath Singh and district officials at the helipad

Rockets Rain On Tel Aviv As Violence Expands By Agencies 2 days, 7 hours ago