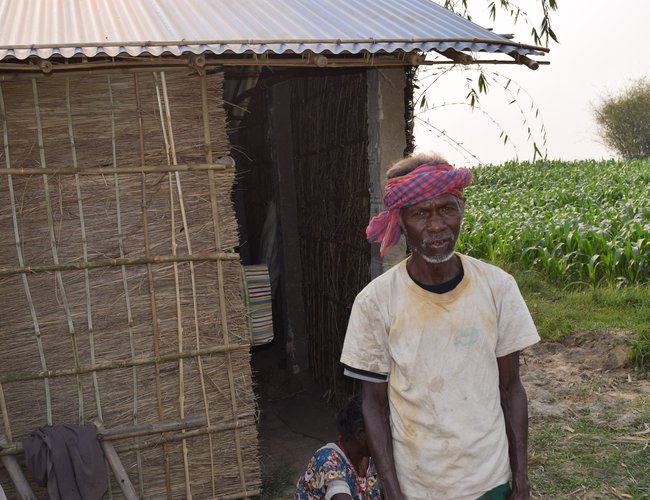 For centuries, families of Krishna Bisku, 73, a person of the Santhal Community, have been living in the southern parts of Jhapa. Bisku, now a resident of Sadakbari, Jhapa Rural Municipality, Ward No 2 Jhapa is an old member of the Santhal community. The Santhlal are indigenous people living in the eastern parts of Nepal and India as hunters and gatherers.

“The lands here had dense forests with varied wildlife including tigers and elephants. We shifted places along the Kankai river till the 1970s. After the people from the hill migrated here and cleared the forest lands, our communities including the Dhimal and Rajbanshi were forced to move closer to bank of Kankai,” recalled Bisku. "Since we roamed the forest lands, landownership certificates and citizenship was out of question. My father died without documents and I don’t have documents as well because I didn’t inherit any from my father.”

Although Bisku was one of the sons of the soil, the Nepali state does not recognize him and his attachment with Nepali land because he does not have papers to prove to them that he is Nepali as prescribed by the law. By virtue of his birth, he is a Nepali Citizen but he does not have an official citizenship certificate.

However clever settlers who came to the land less than five decades ago are now landlords enjoying all the privileges of the state because they had some knowledge about laws. However, thousands of people like Bisku, who were born and raised here, have been living like outsiders. "The new settlers registered banks of the Mai and other rivers as theirs. We don't have any place to live anymore," said Bisku, who does not know about the debate in Kathmandu's Parliament.

Bisku is not alone, there are many other Dhimals, Santhals and Rajbansis who do not have citizenships and land owner certificates. Since they do not have certificates, they are deprived from basic services provided by the state for citizenship owners.

Even though Bisku and tens of thousands of other Nepalis have been facing difficulties regarding their identities the Nepalese parliament does not show any concerns and doesn't bother writing clauses that could make the process easier for people like Bisku.

In the name of nationalism, a group of people lobbying in the parliament are making the act more rigid than prescribed in the constitution. This group of parliamentarians’ view is; weakening the law will pave way for more people from the southern border enter Nepal.

“Nepal being overwhelmed by foreigners if the government adopts a liberal citizenship regime is an unnecessary thought. Why would people come to Nepal? People migrate either for opportunities or because of war. If Nepal had opportunities, four million Nepalis would not have gone to foreign countries as laborers. Many Nepalis work in India as well. So I don't see India’s bhanjas and bhanjis (newphes and nieces) swamping Nepal," said Anup Raj Sharma, Chairman of Nepal Human Rights Commission to The Himalayan Times.

Nepal has two classes of citizens; one class is the people who have citizenship certificates which gives the access to all privileges provided by the state and the other class is deprived of all the rights and privileges of the country due to the lack of an authentic citizenship.

Although the Dalit and indigenous communities of the southern plains are marginalized, they have been living in Nepalese territory for generations. Despite this, they are denied of citizenship certificates, which is mandatory for citizens to get basic services provided by the state. Due to the lack of a citizenship, these people have been living in miserable conditions.

“Ten years ago, a team had come to us but they did not issue our certificates because we did not have landownership certificates,” said Bishku, a Santhal. Although Bisku’s name is in the voter’s list, he can’t claim his citizenship and landownership.

Hem Ram Sahali, 55, has also a similar story to tell. Living in the same area, Sahali has no citizenship and landownership certificates either. “In my own land, I am living as a foreigner without access to the government’s services. “This is our ancestor’s land. Migrants from the hills, including Brahimin, Rai, Limbu and migrants from India snatched our land and we are landless.”

Sadhana Rishidev of Maidhar Jhapa has a citizenship certificate issued on the basis of birth. Under this category of citizenship however, her offspring cannot be given a Nepali citizenship as per constitutional and legal provisions.

Majority of residents of a Mushar settlement of Lalbandi Municipality, Ward No 5, of Sarlahi District, do not have a citizenship certificate as well. Even though they have been living here in Nepal for generations the residents aren’t allowed to have a citizenship.

Although twenty-two year old Hema Majhi, a mother of two, is a testimony to the transformation in Lalbandi, her family life remains the same. Along with Majhi, other neighbors have been living in a public land near the river and annually they have to shift from places to escape flood.

Jakshi Jhangar, 45, a resident of Naharatole of Rangeli Municipality, Ward No 2, does not own a citizenship certificate and land despite living there for decades.

“I have visited the local ward several times but they always say that my evidences are not enough for me to claim a citizenship certificate. I don’t know what the officials want as we were born and raised here,” asked Jhangar.

Nepal’s civil service and the people working under it are biased and they can’t see the poor situation of these voiceless marginalized communities. "As the state is biased against particular regions and groups, there are over 4 million people living without a citizenship certificate," said Sarbendranath Shukla leader of Rashtriya Janta Party Nepal. Representatives of the parliament are conspiring against stateless people again."

“The problem with citizenship certificates in Nepal is that the officials link citizenship certificate with land-ownership. A landless person can be a citizen of Nepal if he was born at the time of commencement of constitution of Nepal 1961,” said former Attorney General Badri Bahadur Karki. “It is a misunderstanding and can be regarded as a misinterpretation of the law and constitution. This issue is also politicized too much.”

“We know Santhals are the sons of the soil and they have been living here for centuries. Since there is an administrative risk involved, nobody is willing to recommend the idea to Mushars and Santhals eventhough they don’t need legal documents anymore.” said Raj Kumar Yadav, ward chair of Jhapa Rural Municipality-1. “The central government has to take the decision. There is no other way.”

According to a survey report, there are 52,000 Santhal and 234358 Mushar families living in 22 districts of Terai. For instance, the Mushar population is concentrated in eight districts of eastern Nepal and Santhal and Rajbanshi are in Jhapa and Morang.

The Constitution of Nepal and Citizenship Act 2063 and Nepal Citizenship Regulations 2063 have made provisions and processes for obtaining the citizenship of Nepal.

According to the Constitution, the people who have obtained citizenship of Nepal at the time of commencement of this Constitution and who are qualified to obtain citizenship in accordance with this part shall be the citizens of Nepal. 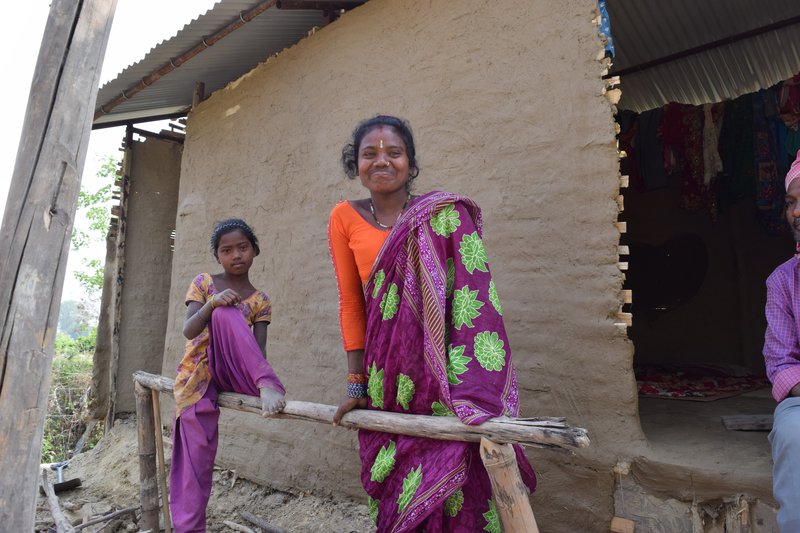 The following person, who has his or her permanent domicile in Nepal at the time of commencement of this Constitution shall be the citizen of Nepal by descent, a person who has obtained the citizenship of Nepal by descent prior to the commencement of this Constitution, a person whose father or mother was a citizen of Nepal at his or her birth.

Every minor who is found within Nepal and the whereabouts of whose father and mother are not known shall, until the father or the mother of the child is traced, be a citizen of Nepal by descent.

A person who is born in Nepal from a woman who is a citizen of Nepal and has resided in Nepal and whose father is not traced shall be provided with the citizenship of Nepal by descent.

Any person born before 2046 Chaitra 31, Bikram Sambat (i.e. 13, April, 1990 A.D.) within the territory of Nepal and having domiciled permanently in Nepal shall be deemed a citizen of Nepal by birth.

Since the first citizenship Act was enacted on May 8, 1952, laying down formal criteria for the qualifications of becoming a Nepali citizen, four constitutions and several acts have changed. However, large numbers of people are yet to acquire their citizenship certificates.

The same Ordinance was adopted in February 28, 1964 as the Nepal Citizenship Act, 1964. This Act made some drastic changes in the citizenship law of Nepal. Citizenship by descent could only be acquired by people whose fathers were Nepali citizens at the time of the child’s birth.

Despite the restoration of multi-party democracy in 1990, citizenship Act of 1964 was retained by Constitution of 1990. However, the Interim Construction 2007 dropped the provisions of the Act.

Article 10(1) of the Constitution of Nepal 2015 recognized acquisition of citizenship as a right of all Nepali citizens and Article 10(2) states that there will be a single federal citizenship with provincial identity. However, the meaning of “citizens” and “people having citizenships” is unclear.

Along with indigenous and marginalized population, large number of children with single mothers have not obtained their citizenship certificates. Although the constitution states that the children of unidentified fathers may obtain citizenship through their mothers, there are thousands of children living without citizenships.

"We have a very clear concept that there should not be any discrimination between men and women. In the citizenship law however, there discrimination against women. If a person can immediately acquire citizenship through their father, why can’t they get citizenships through their mother? Why is the declaration of a child’s father compulsory? The constitution does not say so, but the act creates hurdles. So mindset of the people should change, but mindsets will only change if the government interprets the constitution correctly and does not bring acts that contradict constitution," said NHRC chair Sharma to The Himalayan Times. 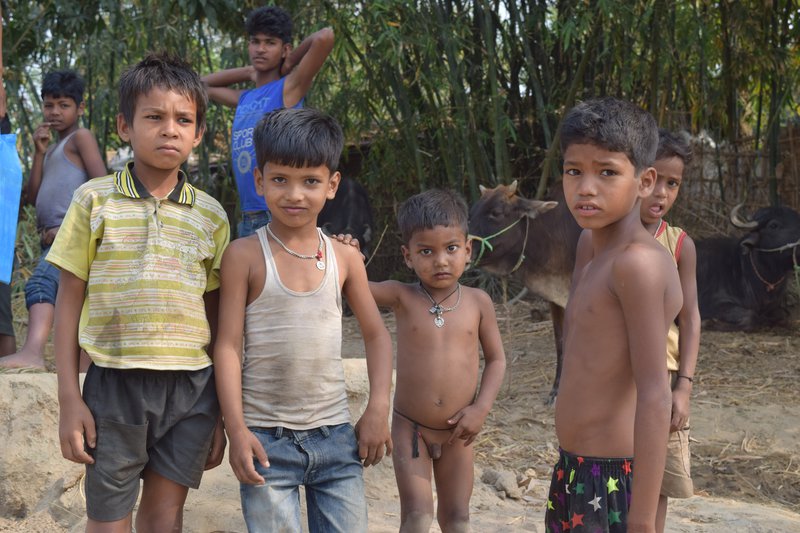 Forum for Women, Law and Development (FWLD) has been fighting for decades to establish citizenship rights. “Although the constitution said that if a father is a foreign citizen, the child becomes eligible for naturalization. In practice, many single women face difficulties registering their children as citizens by descent,” said a report of FWLD.

The Supreme Court ruled that government authorities must not deny registration of birth and citizenship of children whose mothers and fathers cannot be traced.

An estimated 5.4 million individuals (24 per cent of the population aged 16 years and above lack citizenship documentation in Nepal, said the Country Reports on Human Rights Practices for 2017 released by the US Department.

As the bill on citizenship is in debate in the parliament, the time to provide genuine Nepali citizenship certificates without any discrimination and without making it an issue of nationalism has come.

NEPAL-INDIA Bonds Across Border By Keshab Poudel 10 hours, 15 minutes ago

India Open To Engaging With Nepal In An Environment Of Trust And Confidence: MEA Spokesperson By NEW SPOTLIGHT ONLINE 1 day, 21 hours ago