With the announcement of the new scheme to lure public investment in hydropower, the recent news that Upper Tamakosi will complete by November gives good a message 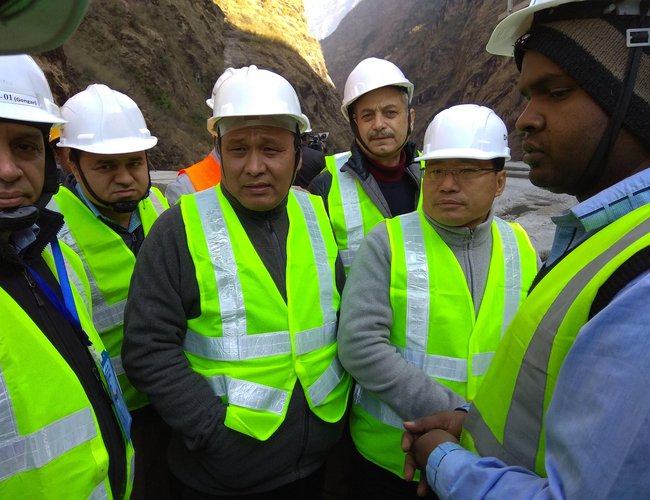 After achieving major breakthrough dispatching all penstock pipes in the project sites, Ministry of Energy and Nepal Electricity Authority's officials have announced a new working schedule to complete the 456 MW Upper Tamakosi Project before November 2018.

With the recent visit of Minister of Energy, Water Resources and Irrigation Barsha Man Pun, NEA'S Managing Director Kul Man Ghising at Gonger, Ministry directed to hold a high-level meeting every month in the project site to review the progress.

MD of NEA and chairman of Upper Tamakosi Hydropower Ltd Kul Man Ghising will hold a monthly review meeting with management of the project, contractor companies and consultants. The meeting will review the progress of the project and solve problems that have surfaced in the process of construction.

He talked with project’s chief executive officer Bigyan Shrestha. Minister Pun has made it clear that the government and Nepal Electricity Authority will facilitate to complete the project in time.

Managing Director Kul Man Ghising also visited the sites along with minister Pun to take stock of the project. Minister Pun has made it clear that they are not allowed to make any excuse and no more time extension will be provided. “We all need to go together to complete the project working day and night,” said Minister Pun.

During the site visit, he also held different rounds of meeting with project officials and contractors. During the meeting, contractors have expressed their commitment to complete he project as per the schedule.

"After completion of Tamakosi, Nepal's economy will see drastic change. Thus, the project officials need to work in time," said Minister Pun. "There are concerns all over the country over the completion of national priority project."

Chief Executive Officer Bigyan Prasad Shrestha said that the earthquake, damage by landslides, disruption of supply of petroleum products, construction materials, due to Madhesh Agitation, change of design, weakness of hydro mechanical contractor of lot 2 have delayed the project.

Although the project was supposed to be completed in 2073/074, and has already revised once with the deadline of 2075-076, it was delayed due to contractor of lot 2. Now, the project is undergoing its work to generate electricity by December 31,2019 operation of one 76 MW Unit.

After the completion of the transportation of penstock pipe, one of the most difficult tasks of the project has been completed. Under the lot 2 of the project, five meter long 74 pieces of pipe, which will be used in lower penstock, has already reached the project site in Gonger.

Works of the project halted months due to lack of expertise of Indian Contractor Texamo. The work finally started installing penstock pipes after a new contractor took charge of the construction of the plant.

With the request of UTHL, Texamo and Andritz signed a tripartite agreement in January, 2019 under which the Indian firm subcontracted the penstock installation part of the job to the Austrian company.

Immediately after signing the pact, Andritz mobilized workers at the project site and construction work resumed.

“Andritz Hydro has transported all the pipes and equipment to the project site and started installation work,” said Bigyan Prasad Shrestha, project chief of Upper Tamakoshi. “We are on track to meet the completion deadline of November set by the government.”

The penstock pipe conveys water from the reservoir to the turbines to generate electricity, and fitting the pipes is considered to be one of the most challenging tasks of the hydro-mechanical component.

At a time when delays in the execution of the hydro-mechanical component threatened to push back the completion date of the project, the reaching of all pen-stock pipes gives hope that the project will start generation in time.

Work had halted for months at the construction site of the 456 MW scheme because the Indian contractor for the hydro-mechanical component, Texamo Railway Engineering, lacked expertise to implement the complex task.

The project has faced cost overruns due to delays. It was initially planned to be built at a cost of Rs. 35 billion, but the final bill is now expected to reach Rs. 70 billion, if interest is added. Installing 372 pen-stock pipes in lower the shaft is regarded as a very difficultyask.

Spokesperson of the project Dr. Ganesh Prasad Neupane told Gorkhapatra daily that the pipes were stored in Sunkoshi Power House in Sindhupalchwok for long periods.

Out of 732 meter,Texamo has been going itself. Installation of turbine, generator has already been completed in underground power generation house. Similarly, the progress of concrete at dam site and concrete lining at main tunnel is 99.6 and 53,5 percent respectively. Transmission line construction is also almost complete with 85 percent progress. 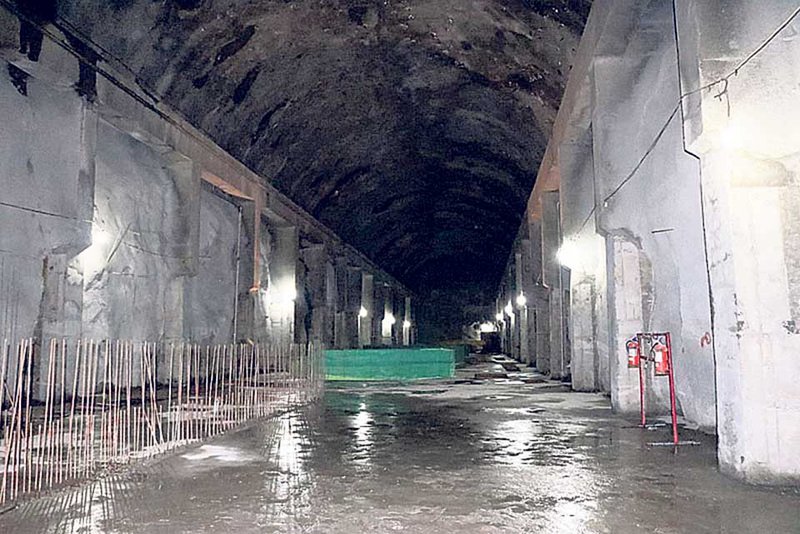 According to MD, the government agencies have charging more interest than the private sector with over 11 percent Compound Interest Rate in every three months.

UPPER TRISULI 3 B Work In Progress By NEW SPOTLIGHT ONLINE 2 weeks, 3 days ago

The Government Will Bring A Relief Package: Minister Pun By NEW SPOTLIGHT ONLINE 2 weeks, 3 days ago