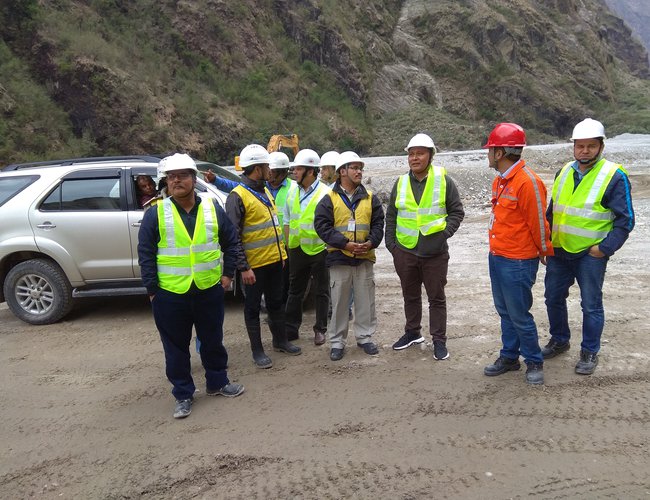 In the presence of Managing Director of Nepal Electricity Authority and chairman of Upper Tamakosi Hydropower Ltd Kul Man Ghising, contractors agreed to start the installation of Upper and Lower Vertical Shaft within this month.

With the direction of minister of Energy, Water resources and Irrigation Barsha Man Pun who set new time table to generate the electricity by end of December 31, MD Ghising paid an inspection visit at the sites of the project and held several rounds of meetings and evaluated the progress to fulfill deadline.

During the inspection visit on April 21 and 22, the contractors said that they will start the installation of lower vertical shaft by May 5 and upper by second week of May.

Installation of pipes of Upper Vertical Shaft will start from the second week of May. Installation of 372 meter long lower shaft is regarded as most difficult and challenging task. In lower vertical shaft, there need to install various pieces of penstock pipes with a length of five mete and 27 tons weight. However, bend penstock pipes of of tail sections have already been installed.

The process of placing the crane to erect the pipes in lower vertical shaft is in final stage. After looking slow work by Indian contractor Texmaco Rail & Engineering Limited, responsible for supplying and fitting penstock pipes, Tamakosi Hydropower Ltd has handed over the work to ANDRITZ Hydro of Austria, a contractor of Lot 3, without additional burden to the project on January 7,2019.

However, Texmaco Rail & Engineering has been doing all fitting works of upper vertical shaft on its own. Minister Pun visited the site on 23 March and directed concerned officials to regularly monitor the project works and sort out the problems in the field, if there is any.

The inspection visit and meting of MD Ghising was part of that direction. MD Ghising held a meeting with project management, representatives of contractor companies and consultants.

Minister Pun directed last month to complete the project in the new timetable and directed NEA MD to pay the site visit monthly to inspect the progress. During the meeting the senior officials of all concerned parties were present.

"Since this project is constructed with the investment of Nepali people, every Nepali is keenly watching the project expressing concern when will it complete. Taking ownership of management, accelerate the work," directed MD Ghising. "The construction of power house has already completed and the turbines are waiting water to charge. As a national priority project, Upper Tamakosi will bring positive change in country's economy."

CEO of Texmaco Rail & Engineering Limited GC Agrawal said that all the contractors are working in the project with better coordination and complete the work in time.

During the meeting, they reviewed the progress in the installation of upper shaft and lower shaft penstock, dam, intake and settling basin. They also discussed to make trial of dam, intake and sand settling basin filling water by the first week of June. MD Ghising directed we have to start the trial by first week of June. He directed contractor to complete concrete lining in main tunnel as soon as possible.

Due to earthquake, after shocks, flood and landslides, Madhesh Agitation, design change and slow work of Lot 2 contractors delayed the project. According to initial plan, the project should have completed by 2016/17. Later it was amended with 2017/2018. 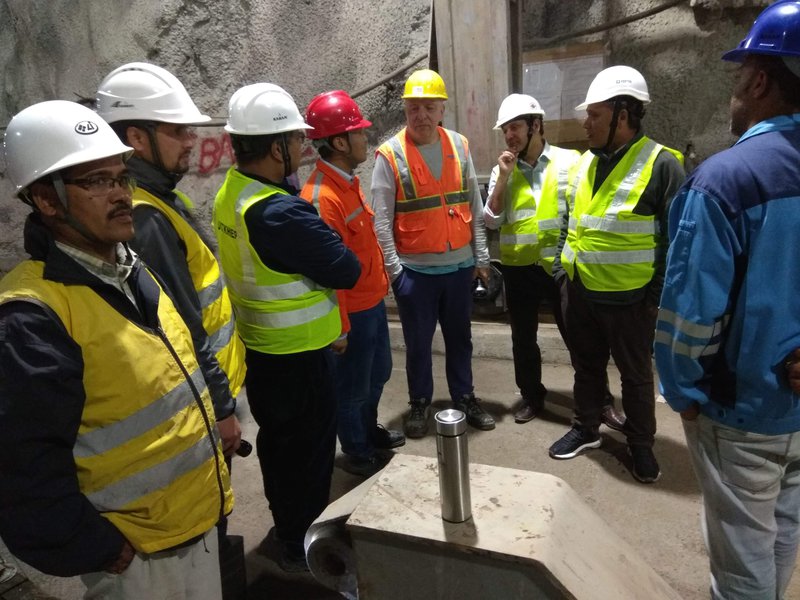 According to the current revised deadline, the project should start the generation from first unit 76 MW by December 31,2019. The construction work is moving following the revised deadline.

According to present revised estimation, the cost reached to Rs. 49.29 excluding the interest of construction period. With Rs. 19.84 billion interest during construction , the total cost of the project is now estimated to be Rs. 69.59 billion.

In the company, NEA has 41, Nepal Telecom 6, Citizen Investment Trust and National Insurance Company 2/2 percent. Similarly, 15 percent for public, 10 percent for Residence of Dolkha and employees of NEA, other companies depositors of Employment Provident Fund 24 percent.