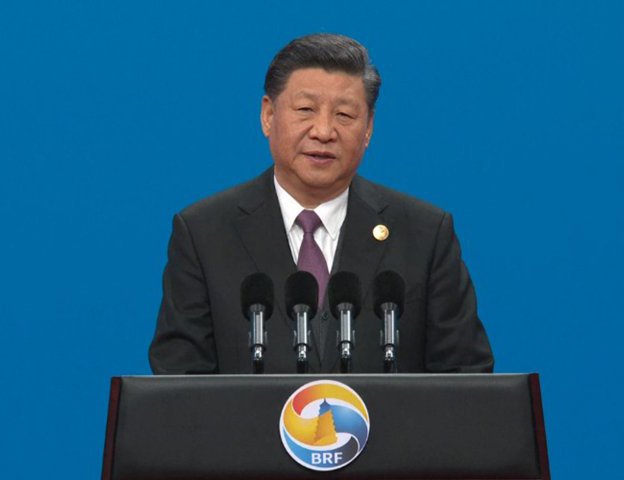 Chinese President Xi Jinping said Friday that joint building of the Belt and Road has opened up new space for the world's economic growth.

According to Global Times, Xi made the remarks in a keynote speech at the opening ceremony of the Second Belt and Road Forum for International Cooperation (BRF) in Beijing.

He said the joint building of the Belt and Road has also created a new platform to boost international trade and investment, expanded new practices to optimize global economic governance, and made new contributions to improving people's well-being in all countries.

Xi said that the Belt and Road Initiative (BRI) aims to build a trade and infrastructure network.

Global Times said tjat based on the principles of equality and mutual benefit, the BRI focuses on connectivity and practical cooperation to achieve win-win outcomes and common development.

The principle of extensive consultation, joint contribution and shared benefits should be upheld, Xi said, and open, green and clean approaches should be adhered to.

The goals of high-standard, livelihood-improving and sustainable development should be achieved, according to the Chinese president.

He added that China will keep promoting the construction of Belt and Road science and technology projects.

It will support 5,000 people from the innovation sector in Belt and Road countries in conducting exchanges, training programs and joint research over the next five years.

Heads of state and government from 37 countries and other representatives from around the world are taking part in the three-day forum, which runs from April 25 to 27.

BRF is a top-level platform for international cooperation under the framework of the Belt and Road Initiative, which was initially proposed by Xi in 2013.

According to Xinhua, Chinese President Xi Jinping on Friday called on participants of the Belt and Road Initiative to continuously advance the initiative along the path of high-quality development.

Xi made the statement in a keynote speech at the opening ceremony of the Second Belt and Road Forum for International Cooperation in Beijing.

The principle of extensive consultation, joint contribution and shared benefits should be upheld, he said.

The open, green and clean approaches should be adhered to, he added.

The goals of high-standard, livelihood-improving and sustainable development should be achieved, according to Xi.

Chinese News Agenchy Xinhua added that the Belt and Road Initiative (BRI) has made great achievements for the benefit of participating countries and demonstrated its all-win nature, said officials and observers gathering here from across the world.

Participants in the ongoing second Belt and Road Forum for International Cooperation (BRF) also cited concrete examples to refute the much-hyped "debt trap" and other unfounded charges hurled at the BRI.

Since Chinese President Xi Jinping proposed the BRI six years ago, 126 countries -- including developed and developing ones -- and 29 international organizations have signed BRI cooperation documents with China.

The three-day BRF, including 12 thematic forums, an opening ceremony and a leaders' roundtable, draws together some 5,000 participants from more than 150 countries and 90 international organizations.

A Coronavirus Upsurge Could Be Devastating For South Asia By NEW SPOTLIGHT ONLINE 2 weeks, 2 days ago