KARNALI PROVINCE Gender Under A Shadow

As local and provincial governments are giving less priority to Gender Equality and Social Inclusion (GESI), Violence Against Women or Gender Based Violence (GBV), has been growing in the mid-western region of the past that is now Karnali Province. With provincial and local level governments slashing the budget under GESI, gender-based programs have been affected. At a time when over 90 percent budget goes to infrastructure development, for road and building, the achievements made by Nepal in gender issue over the years might face a reversal 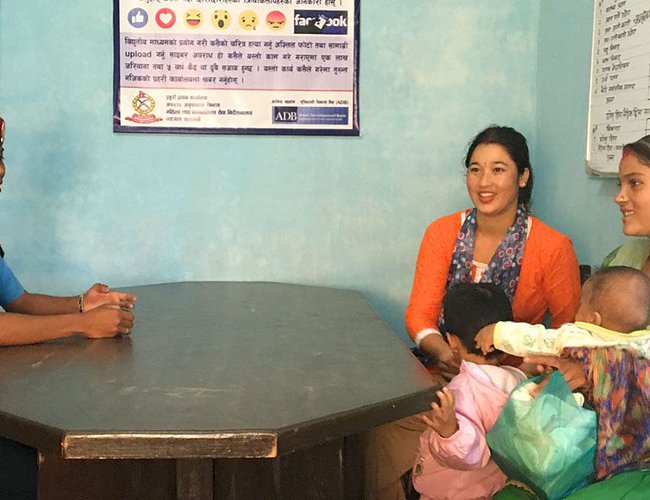 In Nepal, although marriage before the age of 20 is illegal and punishable and use of alcohol in public places is a civil offense punishable by up to three months in prison, child marriage and misuse of alcohol are rampant in districts and villages in Karnali Province.

With rampant child marriage and misuse of alcohol, incidents of violence against women continue to rise. However, the newly elected bodies have not shown much of their concern. Recent reports of two municipalities and one VDC of Karnali Province have revealed that elected representatives are more concerned about expanding infrastructure rather than stretching social capital, gender and empowerment program.

Allocating over ninety percent of the budget in infrastructure, local bodies spend virtually nominal budgets for the welfare and protection of women, children and elderly.

Situated in Dailekh District, Narayan Municipality has 11 wards, with total budget on concurrent and capital expenditure. It has allocated just over Rs. 900,000 for the welfare and livelihood of women, dalit, children, Janjati, backward and elderly communities.

Under the new mandatory provisions, people have voted two women in each ward. However, they are yet to register their voices in the male dominated ward office and General Council meeting.

“Since connectivity is a major problem of Narayan Municipality, we are allocating necessary budget to connect all the wards of our new Municipality,” said the mayor of the municipality. As a remote municipality, we have very few areas from where to collect the local revenue, that is why, we depend in bulk for central and provincial grants. I have already told our women members that they have to support us to build the infrastructure, particularly roads,” said Mayor Ratan Bahadur Khadka.

With the support from Nepal’s development partners and government’s own resources, the budget allocated for targeted groups, including women, dalit, and people, with disability, children and indigenous people Rs. 1000000.

Out of the total budget, the municipality has also allocated the budget for Gender Equality and Social Inclusion. The budget allocated under this title is Rs.100,000. With rampant incidents related to Chaupadi, the Municipality allocated Rs.100.000 to conduct a campaign against Chaupadi.

The situation of Khandachakra Municipality of Kalikot District too is not different. It allocated more than 70 percent of its budget to infrastructure and mere 5 percent for women, children, gender and social inclusion. With a total of over 120 million budget, eighty percent goes to capital investment, which includes road construction and purchasing of vehicles and other machineries.

“Since ours is a newly set up municipality with no connectivity, our priority is to build the roads and other infrastructures. Road connectivity is a pre-requisite to end the discrimination at all levels,” said Ratna Bahadur Shahi, mayor of Municipality.

The situation is not different in Sinja Gaunpalika either. With its 52 million annual budget for the ongoing fiscal year, the municipality sanctions 45 million rupees for construction and maintenance of roads and bridges.

District’s Sinja Gaupalika is one of the most vulnerable places for gender discriminations and gender based violence.

With poor Human Development Index (HDI), all the Rural Municipalities and Municipalities in Karnali Province need massive investment in the social sectors like Gender Discrimination and Social Inclusion

According to UNAF District Profile, Kalikot ranked 73rd of Nepal’s 75 districts on the Human Development Index in 2004. The average life expectancy in Kalikot is 47, below the national average.

“The prevalence of sexual abuse of women and children is reportedly high in Kalikot district, as well as in other areas of the Karnali. Caste-and gender-based discrimination is very widespread in Kalikot. Discriminatory practices were greatly reduced during the conflict period, but resumed since the peace process began. Kalikot lags behind national averages on various educational indicators,” says the report.

As in most other districts of Karnali, caste-and gender-based discriminatory practices continue to hamper the wellbeing of women and historically marginalized groups in Dailekh. Number of victims of domestic violence continues to grow. UN HRD shows child marriage is common in Dailekh. While 73% of boys and men aged five and above are literate, only 53% of girls and women can read and write.

Like other Gaunpalika in Jumla, Sinja Gaupalika also has rampant incidents of gender inequality and domestic violence. Although the Gaunpalika is connected by Karnali highway, it is one of backward areas due to its remoteness. The practice to migrate during the winter season to the hill and Terai areas continues. Large number of males continue seasonal migration to India to cope with chronic food insecurity, especially during winter.

With easy availability of alcohol in open market and household level, the incidents of violence against women are very high in all communities. The situation is worse in the Dalit community.

Along with other Gaunpalika and Municipality, these three areas have also made quite a good progress addressing the Gender Equality and Social Inclusion. However, a large proportion of people living in these villages have been facing discrimination of many facets.

The Constitution of Nepal envisions Nepal as an inclusive state and guarantees the right to equality for all its citizens and the government has already taken the number of initiatives including promulgation of new acts. GESI Working Groups have been formed in various levels to help realize the constitution’s vision of inclusion and equality.

Nepal Government and development partners have implemented various policies and programs in line with these mandates. The GoN GESI policies and guidelines have been adopted in seven sectors.

It is encouraging that so far seven major sectoral ministries (Agriculture, Education, Forest, Health, Federal Affairs and Local Development, Urban Development, Water Supply and Sanitation) have issued and are implementing GESI policies and guidelines and, in many cases, have established dedicated units with specially trained staff and systems to monitor results.

Achieving Key Sustainable Development Goals Welfare outcomes are improving steadily in Nepal – though at different rates for different groups. Although poverty levels have dropped dramatically across the board over the last several decades, there are still disparities based on social identity and location.

At a time when the provincial government and local level government are allocating their huge budget to physical capitals like road and bridge at the cost of social sector, disparities between women and men and different social groups and violence against women are likely to increase in Karnali Province.

Melamchi Water To Reach Kathmandu On Saturday, Urged Locals To Cautions By Agencies 1 day, 20 hours ago

PPE And Reproductive Health Kits Handed Over To Nepal By NEW SPOTLIGHT ONLINE 2 days, 16 hours ago