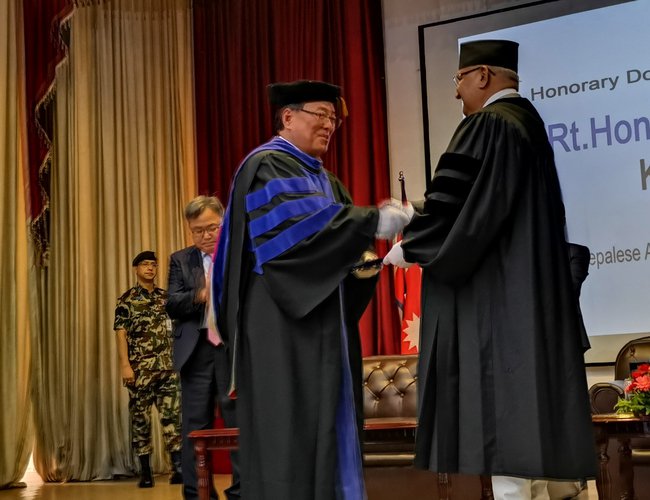 At a time when there is growing concerns over conversion in Nepal by Christian missionary, Prime Minister KP Sharma Oli has been conferred an honorary PhD degree by the Kangnam University, a private Christian university in Yongin, South Korea, for his contribution to Nepali politics.

Founded July 1, 1946 by Reverend Yi Ho-bin as the Choong-ang Theology Institute, the school initially met at a lecture hall in the local YMCA in Seoul, South Korea. The university holds the spirit of Gyeongcheonanein, which means 'to worship the heavens and love mankind'. The institution eventually moved in 1967 to Jangsa-dong in Seoul and then to the Daechi-dong, Gangnam-gu in 1974. 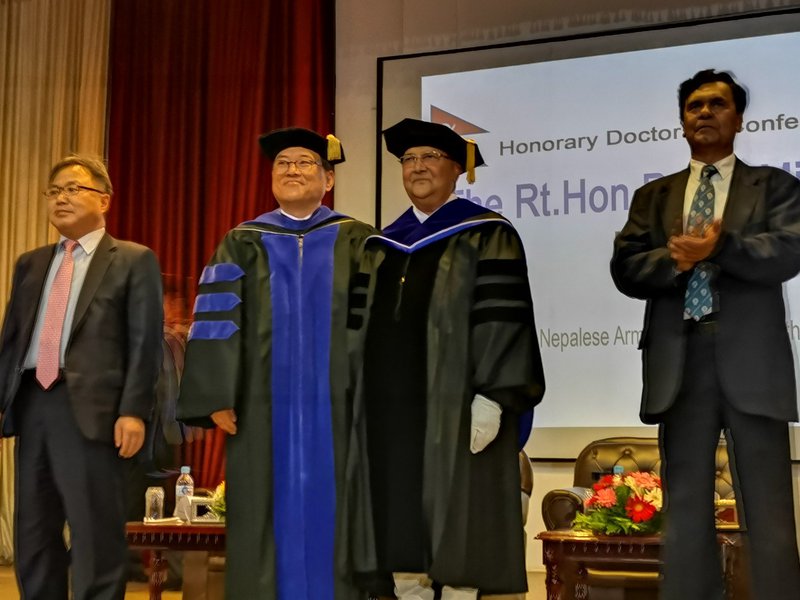 In 1976, the school was renamed the Kangnam Social Welfare School; the name, which the university kept to this day, comes from its city ward at the time. In 1980, the school moved to its present location in Yongin, Gyeonggi-do, South Korea. Kangnam received its university accreditation in 1992.

This is his fourth PhD which was awarded to him amid a special event co-organised by the Tribhuwan University. His first honorary doctorate degree, albeit a little too controversial, was awarded to him by ‘Greenford International University’ said to be situated in the United States of America.

Prior to today’s honour, the UN University for Peace had awarded the degree of ‘doctor honoris causa’ to Prime Minister KP Sharma Oli at a special convocation organised in San José on October 1, 2018. The honorary doctorate was conferred on the Prime Minister in recognition of his contribution to achieving peace and democracy in Nepal.

Likewise, in April last year, Govinda Ballabh Pant University of Agriculture and Technology in Uttarakhand, India, awarded PM Oli with honorary doctorate in science on Oli, during his state visit to the neighbouring country.

COVID-19: Number Of Children Living In Household Poverty To Soar By Up To 86 Million By End Of Year By NEW SPOTLIGHT ONLINE 5 hours, 5 minutes ago

Twelve Nepali Migrant Returnees Killed and 20 Injured In a Bus Accident In Banke By NEW SPOTLIGHT ONLINE 15 hours, 15 minutes ago

Nepal Extends Lockdown Until June 14 And Suspended All Flights Till June 30 By NEW SPOTLIGHT ONLINE 2 days, 1 hour ago