Nepal Army collected 10,00 kg of wastes during its Mount Everest Clean Up Campaign 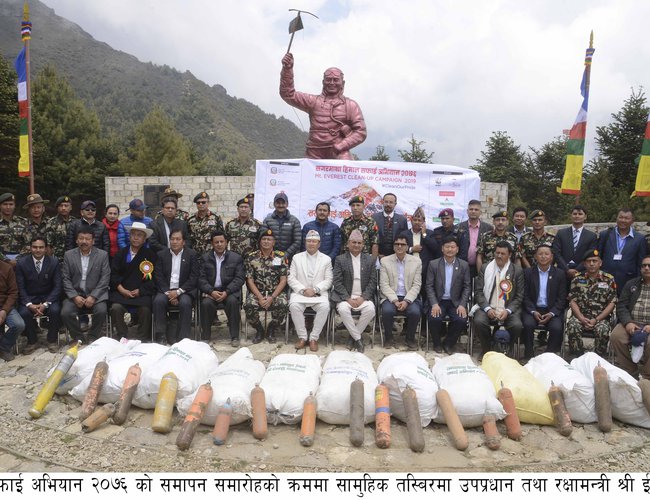 Just after taking the command of Nepal as Chief of Army Staff (CoAS) Purna Chandra Thapa issued a Command and Directives of CoAS. One of the key element of his command and directives has stated that the NA will work for cleaning the mountain.

With piles pollution lying here and there, Nepal Army, in collaboration with other organizations including different government organizations, local NGOs, local level and provincial offices, collected 10,000 kg of garbage from Everest region under Sagarmatha Clean Campaign 2076.

Having working to protect the nation and nature, Nepal Army has been constantly siding for the cause of Nepal. CoAS General Thapa's Command and Directives has also shown how to make the highest peak of the world clean.

Under the institutional directives of CoAS General Thapa, Nepal Army mobilized its existence equipments and manpower to collect the debris left by mountaineers and trekkers.

Deputy Prime Minister and Defense Minister Ishwor Pokharel inspected the concluding program of Mount Everest Clean Campaign 2076. Out of them 4000 kg has already brought to Kathmandu and Nepal Army is planning to bring remaining 6000 kg of wastes from Everest. Addressing the program, DPM Pokharel said that Nepal Army has been working to serve nation and people thanking NA team for taking Nobel work cleaning the debris of Mount Everest.

Addressing the program, Chief Minister of Province 1 Sherdhan Rai announced to provide 5 million rupees to Khumbu Pasang Rural Municipality making it a model tourism village of the province. He said that Mount Everest should be made part of Nepal’s prosperity. 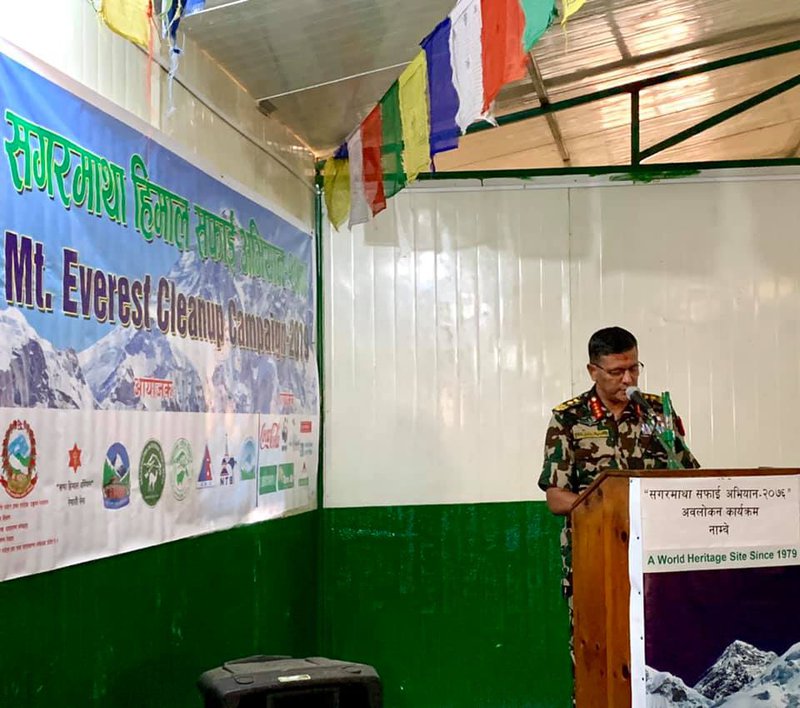 Chief of Army Staff General Purna Chandra Thapa said that there need to work together to improve environment and nature Khumbu Region urging all not to make necessary arrangement to manage waste.

According to the NA spokesperson Bigyan Dev Pandey, the NA followed the command and directives of CoAS Thapa, which stated that the NA will work for cleaning the mountain. This is the first time that the NA took initiatives to clean the tallest mountain of the world, according to Pandey.

“Twelve Sherpas helped to collect the garbage above the base camp,” said Pandey, adding that the Sherpas collected garbage from different camps of Mt. Everest.

The Nepali Army first carried the garbage collected from Mt Everest to Gorakshep, located inside the Sagarmatha National Park, by a helicopter.

The stakeholders today claimed that a month-long cleaning campaign on the world’s highest mountain has concluded successfully collecting over 10,000 kilograms of rubbish from the Mt Everest region.

According to Ang Dorje Sherpa, Chairman at the Sagarmatha Pollution Control Committee, the mega Everest clean-up drive was conducted in coordination with the government and non-government agencies for the first time in the history of Everest climbing.

“At least four dead bodies and the rubbish left behind by the world climbers in the high camps of Mt Everest have also been collected during the campaign,” Sherpa said.

According to Sherpa, different teams spent over a month at the Everest Base Camp, Camp II and Camp IV to collect the garbage. “More than 6,000 kg of waste was collected from the base camp and the high camps,” he said, adding that the local community groups also joined hands to keep the Khumbu region clean.

Pasang Nuru Sherpa, one of the members of the cleaning team, said that it was really a tough task as the team struggled hard to collect trash in the high camps.

Major Dipendra Neupane of Nepal Army said that over Rs 23 million was spent to run the campaign. “The campaign will continue in the coming years.”

EU And Nepal To Close The NEARR Facility By NEW SPOTLIGHT ONLINE 2 days, 3 hours ago

MELAMCHI PROJECT Water At The Tap By Keshab Poudel 1 week, 2 days ago

STATUE OF LATE DILLI JUNG THAPA Cause For Recognition By A Correspondent 1 week, 2 days ago