Minister Pun Stresses For Promotion Of Electric Vehicle In Nepal

Minister Pun Stresses For Promotion Of Electric Vehicle In Nepal 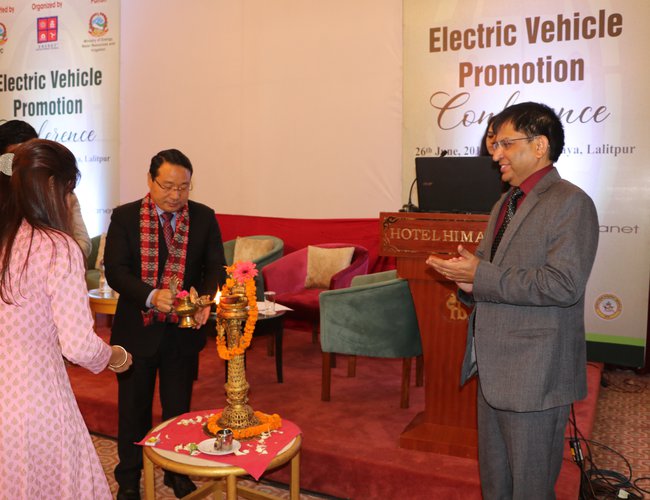 Minister Pun said that the government is working towards maximizing use of electric vehicles in Nepal. He said that there is a need for Nepal to switch from non-renewable fossil fuels to sustainable and clean energy.

Sujit Acharya, Chairman of EDC noted that Nepal has a hydro-power potential of more than 400,000 MW and thus Nepal is inevitable to go electric in the future.

He said that the pressing need to convert all petrol scooters and motorcycles into electric. Converting two and four-wheeler private vehicles from petrol to EV creates 6000 MW market for Nepal’s electricity.

Acharya said it saves Nepal more than 2.5 billion USD in petroleum and petroleum product bills thereby reducing the trade deficit drastically. Nepal’s petrol shall thus be called electricity. All Nepalis therefore should boycott petroleum-based products to ensure no future blockades affect them like it did in the past because then, our transport would be powered by Nepal’s electricity and not foreign-imported fuels.

Madhusudan Adhikari, Executive Director, Alternative Energy Promotion Center (AEPC), said that all of us should be prepared for alternative energy replacing traditional energy sources for a better future.

During the program various issues were raised including difficulty in passing favorable legislations and the complicated bureaucratic processes in addressing the introduction of EVs in Nepal. The participants gave key focus on the implementation of easy-charging access points and the introduction of a favorable environment for EVs including tax rebates and subsidies.

After the discussion, Rowan Fraser, Country Representative, GGGI provided a presentation on the topic “Policy and Investment projects for electric mobility”. He noted the need to identify various barriers and need to work together with various stakeholders to overcome these barriers to establish electric mobility within the country.

Awashis Ojha, Head of Marketing and Communication, Laxmi Hyundai Pvt. Ltd. also gave a productive presentation on the topic “Electric Vehicles”, where he discussed the trends of electric vehicles in Nepal and the global arena, and the role Hyundai is playing in introducing EVs in the country. The program then adjourned for lunch.

He gave an overview of the history and achievements of EVs in Nepal and shared his experience working with EVs.Later, Prof. Bhim Prasad Shrestha, Dept. of Mechanical Engineering, KU & Vice Chancellor’s Office of External Affairs and local Engagement of Kathmandu University gave a presentation on the topic “Research and Development Activities on Electric Vehicle at Kathmandu University”. 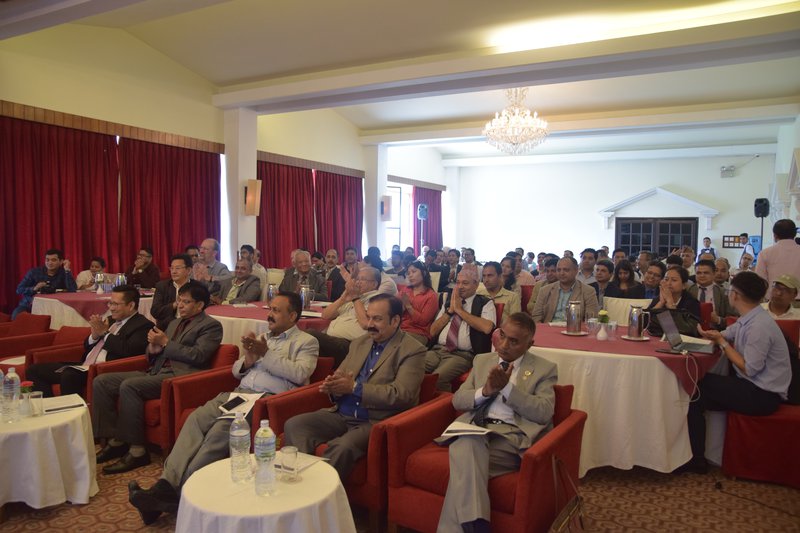 Dr. Bimala Rai Paudyal, MP, National Assembly at Federal Parliament of Nepal adjourned the session with a short keynote speech. She noted her campaign in the parliament against petroleum-based policies and a push for an alternative energy source for environmental and public health reasons. She suggested pushing electric-vehicle policies as economic issues so that the government takes it more seriously in a ground-framework basis.

Keshab Prasad Chapagai gave the vote of thanks and thanked everyone for participating in making this conference successful and encouraging a fruitful discussion.

Organized by EDC, The conference aimed to promote electric vehicle use and the proper utilization of the available energy in Nepal.

EDC is an umbrella organization representing the entire energy sector of Nepal consisting of Energy Developers, Energy Associations, Energy Consumers, Energy Financiers and other funds, Consumer Institutions, Energy Contractors from both private and government sectors involved in hydropower, solar, wind and other renewable, generating more than 80% of the nation’s total electricity.