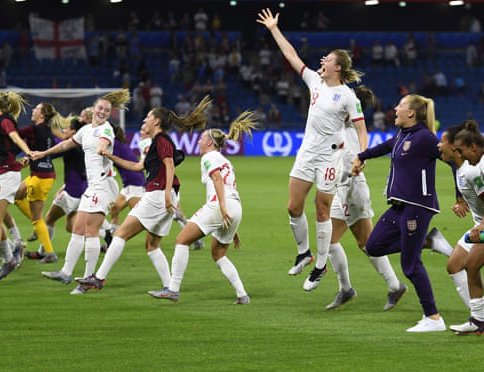 Two slick team moves had given them a deserved 2-0 half-time lead, as Jill Scott and Ellen White found the net from close range either side of White hitting the post.

But that did not dampen England's jubilant mood at full-time, as they celebrated with sheer joy after moving within one win of their first major final.

White's tap-in took her goals tally to five for the tournament, putting her joint leader in the race for the Golden Boot alongside the United States' Alex Morgan and Australia's Sam Kerr.

Backed by thousands of delighted travelling fans, the Lionesses will now face either France or the US in the semi-finals on Tuesday in Lyon.

England's well-deserved progression also boosted their hopes of representing Great Britain at the 2020 Olympics, with the three best-finishing European teams qualifying for next summer's Tokyo Games.

England's three fine goals entertained the 21,111 fans who were at Le Havre's Stade Oceane near the English Channel, including delighted former men's internationals David Beckham and Ian Wright, who witnessed a memorable performance.

The Lionesses, who reached the last four at the 2015 World Cup in Canada and 2017 European Championship, arrived in France with realistic ambitions of winning a first major title and they showed their true potential on Thursday.

Wins over Scotland, Argentina and Japan saw England top Group D without finding their best form, while a victory over an unruly Cameroon side followed in the last 16. The quarter-final against Norway was without doubt the Lionesses' strongest display of the finals so far.

Two excellent team moves down the right gave them a deserved 2-0 half-time lead, with Scott putting England in front in the third minute after Bronze's cut-back.

Lively winger Parris then clipped wide from close range and a confident White fired on to the post as England created the best chances, before the Manchester City-bound striker tucked in from Parris' unselfish square ball.

Backed by their buoyant fans' band, who danced in celebration long after the full-time whistle, England deservedly lapped up the applause before their journey continues to Lyon.

Norway, who won the 1995 title, were playing in their sixth World Cup quarter-final, but were well beaten by a side ranked nine places above them.

Martin Sjogren's team struggled to win the ball in midfield in the early stages and, when they did get in threatening positions in the first half, Barcelona forward Caroline Graham Hansen was repeatedly thwarted by England centre-back Millie Bright.

Aiming to reach the last four for the first time since 2007, Norway did create good opportunities in the second period but were denied by some last-ditch defending.

Houghton did well to clear substitute Lisa-Marie Utland's effort off the line, having earlier intervened to deny Graham Hansen a seemingly certain goal just after the break.

Norway had not previously conceded a first-half goal in finishing second in Group A and eliminating Australia on penalties in the last 16.

But they always faced a difficult task after Scott's early strike went in off the post and they could have lost by more if it was not for Parris' second missed penalty from three attempts at these finals.

Norway have been without Women's Ballon d'Or winner Ada Hegerberg because she has refused to play for the national side since 2017, having taken a stand against what she describes as a lack of respect for female players in the country.

Kane Backs Tottenham To Compete For Honours This Season By Agencies 2 hours, 8 minutes ago

Milan 3-3 Roma: Ibrahimovic On target Twice But Rossoneri Held In Thriller By Agencies 2 hours, 14 minutes ago

Rapid Vienna 1-2 Arsenal: Aubameyang To The Rescue After Leno Howler By Agencies 4 days ago