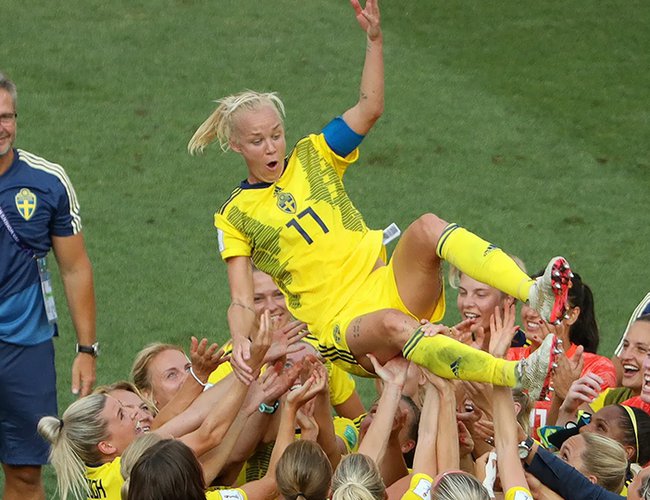 England had to settle for fourth place at the Women's World Cup after a frustrating loss to Sweden in an eventful third-place play-off.

A sloppy start in Nice ultimately saw the Lionesses miss out on bronze, four years after winning a medal at the competition for the first time.

The Lionesses then saw an Ellen White equaliser ruled out for handball after a pitchside video review by the referee, before having the better of the second half, but they could not prevent Sweden securing a top-three finish for a fourth time.

The 2003 runners-up, who were beaten by the Netherlands on Wednesday, were grateful to defender Nilla Fischer in the latter stages for her superb headed block on the line to keep out Lucy Bronze's goalbound effort.

For England, who lost to the holders the United States in a gripping semi-final on Tuesday, a fourth-place finish represents their second-best Women's World Cup,

Only two senior England teams have done better than finish fourth at a global tournament - the men of 1966 and the women of 2015 - with Neville's side matching the men's World Cup achievements of 1990 and 2018.

Their play improved once Chelsea's Kirby - who produced her best performance of these finals - had cut inside and halved the deficit with a good finish off the inside of the post.

With the Lionesses in the ascendancy, England's leading scorer White thought she had equalised soon afterwards. But her neat finish was ruled out after the video assistant referee officials spotted that her arm had made contact with the ball as she controlled it before using her strength to swivel and slot in low past Hedvig Lindahl.

Had she scored without the handball offence, the 30-year-old would have moved to the top of the goal standings in the race for the Golden Boot, before Sunday's final between the USA and the Netherlands.

It was the second straight game in which White saw a would-be equaliser for 2-2 ruled out after a VAR review, having been found to be fractionally offside after placing home against the USA on Tuesday.

The Manchester City striker had chances for further goals on Saturday, but her one-on-one effort was saved by former Chelsea goalkeeper Lindahl moments before half-time, and she saw another shot blocked wide in the 81st minute.

England had been hoping to win a bronze medal for a second consecutive Women's World Cup, but started poorly in defence.

Former Manchester City midfielder Asllani capitalised when Alex Greenwood's soft clearance from Fridolina Rolfo's cross fell straight to her; Carly Telford got a hand to her shot but could not keep it out.

England were then fortunate not to concede again when Jakobsson got in behind Greenwood and struck the post, but the Montpellier forward netted soon afterwards with a curling effort after finding space on the left.

After that Swedish spell, the remaining three-quarters of the match saw the Lionesses look far more like the side that had impressed with back-to-back 3-0 victories to reach the last four.

This England team have won the support of millions back home - with 11.7m watching the BBC for the dramatic loss to the USA - but when they look back on this summer, they may feel disappointed.

England have won five of their seven games during the month-long tournament in France, enjoying victories over Scotland, Argentina, Japan, Cameroon and Norway, before two 2-1 losses in the testing final week of the competition.

There were many, many positives though - including the fact that their results secured Great Britain a qualification spot for next summer's Olympics.

There is reason for the Lionesses to be optimistic for their next major tournament - the 2021 European Championship, which will be held in England.

Those competitions will be played without England legend Karen Carney, who announced on Friday that she would be retiring from football after this tournament.

The 31-year-old was brought on as a substitute with 15 minutes remaining in Nice and showed plenty of classy touches that were typical of her impressive career, which including a European title with Arsenal's quadruple-winning side of 2007.