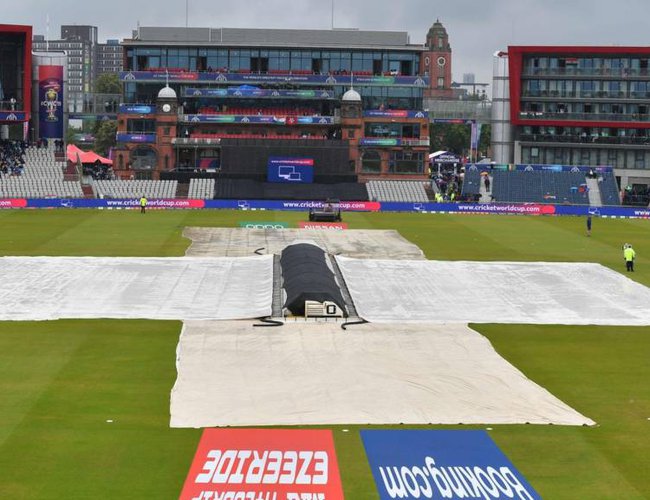 As weather likely to be mixed conditions at Old Trafford with sunny intervals but some showers, India and New Zeeland semifinal match likely to be affected.

BBC Sports reports that there should be some play with some decent drier interludes between the showers but interruptions are likely. It will be a warmer day than today too with highs of around 22C.

New Zealand reached 211-5 from 46.1 overs before rain forced the players from the field. The rain was not heavy but it was consistent enough to delay play, with the umpires deciding at 18:25 no further action would be possible.

It means New Zealand will resume their innings on Wednesday and India will have the full 50 overs to chase.

It was, without a doubt, a disappointing day - India were on top on a slow pitch in front of a vociferous crowd, and returning for a second day will be a logistical challenge for some fans. It, does, however, seem to be the fairer option as it ensures both sides play a full 50 overs.

New Zealand's batting has not fired throughout the tournament, Williamson aside, and they almost lost Martin Guptill to the first ball of the innings when he was struck in front by Bhuvneshwar Kumar.

India reviewed the not out decision but lost their review.

It was slow going throughout the day. New Zealand did not score a run until the 17th ball of the innings; they did not hit a four until the eighth over.

The wasted review against Guptill did not cost India too much - he was dismissed shortly afterwards for one, caught by Virat Kohli at second slip - and Henry Nicholls and Kane Williamson crawled, rather than cantered, through the overs.

However, the Black Caps, finalists in 2015, will resume on Wednesday with the experienced Ross Taylor at the crease. He hit the first six of the match to reach his half-century and he is capable of pushing them through the final 3.5 overs to a competitive total.

Tokyo Olympics To Start From July 23,2021 By NEW SPOTLIGHT ONLINE 1 week ago