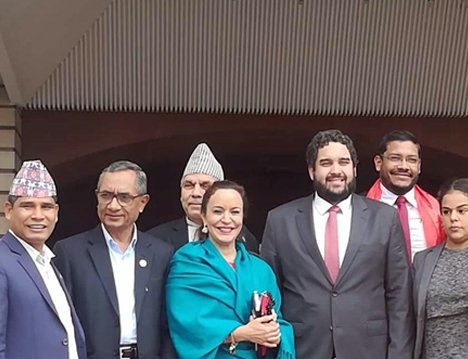 Since the United States Government imposed santion on the Venezuelan president's son Nicolas "Nicolasito" Ernesto Maduro Guerra, whom it accused of profiting from the "corruption" rampant in the government headed by his father, Maduro Guerra has been making to broaden its alliance globally against the United States.

Boycotted all over the world, Nicolasito" Ernesto Maduro Guerra has established relations with top gun of ruling communist party. With a mission to pursue Nepalese communist leaders to oppose U.S. sanctions and show solidarity with his father's regime, Nicolás Maduro is now in Nepal.

It is reported that Nicolas is seeking support for solidarity to fight U.S imperialism.

and is meeting prominent leaders. Guerra has brought three other ministers with him. He’s staying in Nepal till Tuesday and will be meeting leaders from Nepal Communist Party. Guerra and his team came to Nepal upon invitation from NCP’s youth association.

Although government ministers have already declined to see him, Nicolas is meeting NCP leaders.

It is reported that Maduro relies on his son Nicolasito and others close to his authoritarian regime to maintain a stranglehold on the economy and suppress the people of Venezuela.

Nicolasito, 29, is a member of the National Constituent Assembly, considered "illegitimate" by the United States, and was designated by his father to be director of the Inspectors Corps of the Presidency.

U.S accused Maduro's regime saying that it was built on fraudulent elections, and his inner circle lives in luxury off the proceeds of corruption while the Venezuelan people suffer."

This decision freezes all the assets Nicolasito has under United States jurisdiction and bans all US organizations and companies from doing business with him.

Venezuela is going through its worst political tension since last January when Maduro was sworn in for another six-year term as chief executive, which was not accepted by the opposition nor by much of the international community. In response, opposition leader and National Assembly Speaker Juan Guaido proclaimed himself interim president of the nation.

The United States was the first country to recognize Guaido as interim head of state, and was later joined by some 50 other countries, most of them in Latin America.