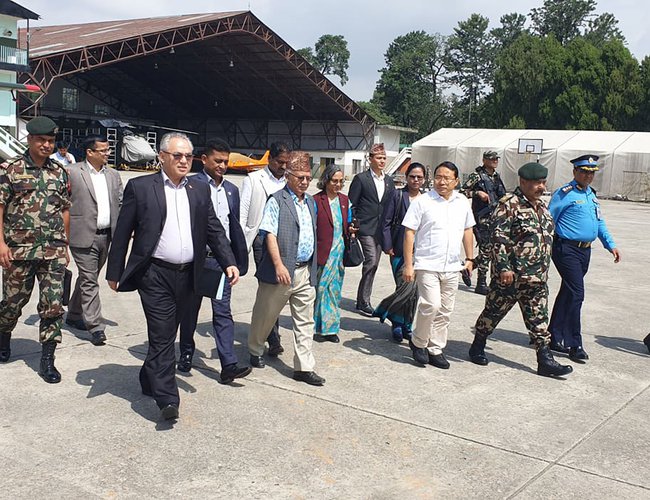 As the casualty from the recent flood reached to 89 with 31 missing, the government agencies are yet to reach at most affected district like Rautahat.

At a time when flood victims have been complaining about the lack of relief materials, a high level team inspected the flood and water inundation areas of province 2. However, they did not meet the victims.

After being displaced from their homes, majority of families are now living in the open areas in their makeshift tents. The floodwaters have receded in the Rautahat and other areas but many people are yet to return to their homes because they were swept away.

The team inspected the flood and inundated affected various districts of Province 2. During the inspection visit, they also visited most affected Rautahat district. However, they did not meet the victims and inspected from helicopter. The team was briefed by the local officials regarding the state of the district.

Rautahat is a home district of former Prime Minister Nepal. Chief District Officer of Rautahat Kiran Thapa said that the team did not meet people because there were no places to land helicopter. “As par the district security committee, we advise team to make air inspections,” said Kiran Thapa.

Light Rain And Snowfall In Western Region Of Nepal By NEW SPOTLIGHT ONLINE 1 day, 23 hours ago

Light Rain Is Likely To Occur At A Few Places Of Nepal By NEW SPOTLIGHT ONLINE 4 days, 21 hours ago

Light To Moderate Rate In many Places of Nepal By NEW SPOTLIGHT ONLINE 5 days, 21 hours ago