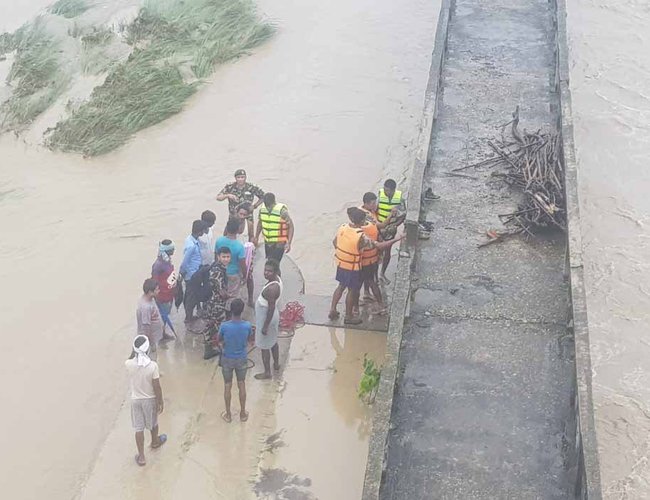 Monsoon rains and floods are twins and, therefore, floods playing havoc this time around is nothing new. As Nepal lies in the upper riparian side of the region, it receives rain that drains out to India crossing the plains of Nepal. However, we see the same complaints and statements being generated in the wake of each monsoon. On the other side of the border, newspapers come out with headlines that the flood in their territory is the result of opening of the dam gates in Nepal. Nepalese side blames Indian embankments for flood and water inundation. Minimizing the effects of flood needs understanding and cooperation between the two countries. Living in the same geography and topography, people on both sides of the border have to face a big suffering.

Centuries of experiences have shown that there is the need of a different approach to deal with the geographic boundaries, which are not created by political boundaries. By virtue of living in the same geography, divided by political boundary, people on both sides of the border need to understand the pain of each other. That is where one can find the solution. With the onset of monsoon, the flood has wrought havoc all over Nepal. Dozens of people have died and dozens are still missing. Tens of thousands of people have lost their property. Annually, all media cover the news narrating the suffering of the people. What is now required is an approach based on reality rather than rhetoric. Although there are many issues to write about for this edition, we have decided to highlights flood as our cover story.

If one looks at the actions of the current government, they raise various questions regarding its intentions on foreign policy, domestic policy and ability to govern. Although prime minister K.P. Sharma Oli has not spared any time to claim that he will pursue the policy of friendship to all, his government’s actions and reactions show that he is doing the opposite. Whether it is handling the issue of pesticide testing at border, clean feed policy, raising water inundation issue and so on, the government's move, knowingly or unknowingly, has targeted one country. In the domestic front, all its actions are directed to majority of the common people. Introduced without intense consultations with different stakeholders, Guthi Bill, Press Council Bill, Human Rights Commission Bill and Electronics Transaction Bill have already created a distrust of people against the government.

US Democracy Is Under A Threat By Keshab Poudel 1 week, 3 days ago

Dissolution In Apex Court By Keshab Poudel 3 weeks, 5 days ago

Populist Budget By A Correspondent 1 year, 7 months ago