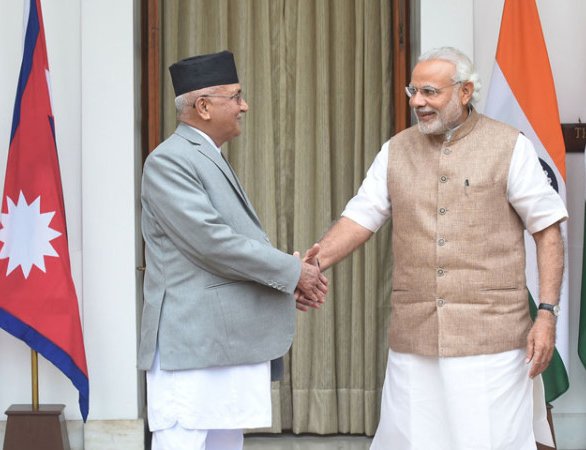 Although the cabinet has withdrawn the unilateral decision to introduce the mandatory test of India's vegetables and fruits, it has badly damaged the relations at the grassroots level.

Although the government's decision to introduce clean feed policy benefits a few hundred people, the decision will harm the interest of a large number of common Nepalese making it impossible for them to watch Indian Television and entertainment channels, which are popular in Nepal.

Similarly, the direction of parliamentary committee not to organize Indian Film Festival Award (IFFA) is another irritating decision taken by the committee headed by a leader of Prime Minister Oli's party.

The recent unilateral decision of Nepal government to introduce mandatory PAN registration for all the payment and Vehicle and Consignment Tracking System (VCTS) will also create irritation.

Since there are large numbers of Indian citizens working in constructions and Small and Medium Enterprises like garment, brick kiln, road construction, infrastructures and handicrafts and Indian vehicles are carrying goods from different Indian production hubs to Nepal, these two systems will likely to create irritation.

Water inundation and floods are common problems faced by the two countries. The government and its supporters are squarely blaming India for flooding and inundation of Nepal's southern plains.

Flood and water inundation issues are technical issues. Nepal as an upper riparian discharges the water naturally to southern border and India as a lower riparian naturally receives a high volume of water inundating its vast land.

As geography has put Nepal and India in such places, the solution of flood, embankment and inundation needs to be found through amicable technical consultation.

As the government has withdrawn the Guthi Bill, this also hints at a hidden agenda. Had the bill passed, more than 10,000 bigas of land in Rupandehi, Dang and Kapilvastu owned by Gorkhapur Math would have been snatched by the tillers.

After the withdrawal of Guthi Bill, Prime Minister Oli's foreign advisor Dr. Rajan Bhattarai said that the internal and external forces are trying to dislodge the government. Dr. Bhattarai's accusation was also understandable. Dr. Bhattarai in his interview indirectly made India responsible for the current internal turmoil.

Moving one step ahead, prime minister K.P. Sharma Oli's principle secretary Bishnu Rimal in his tweet accused opposition and ruling party members, who have been criticizing Oli government, as spirits of external power and anti national.

Although Prime Minister Oli is yet to open his mouth, he is said to hold similar views as Dr. Bhattarai and Rimal. Groomed in anti-Indian school, Nepal's communists, including the present ruling party members, always see foreign power as evil spirit whenever they are in power.

Whether current Co-chair Prachanda or Prime Minister Oli, they don't mind to blame external elements to cover their incapacity and incapability to handle the party.

As Co-chair Prachanda and Prime Minister Oli are now moving ahead with a compromise for power, there is a lull in the political terrain now. Once Prachanda starts raising the question on power sharing, he will be labeled a foreign stooge again.

Unlike expectations that Nepal will maintain good and warm relations with Prime Minister Narendra Modi in his second term, the relations between the two countries are not moving smoothly.

Nepal's political actors, particularly Prime Minister KP Sharma Oli's party, expressed the displeasure from the day one of the appointment of Subramanian Jaishankar as an External Affairs of India.

While heading South Block as secretary, Jaishanker came to Nepal as a special envoy of Prime Minister Modi suggesting Nepal promulgate new constitution acceptable to all.

During his stay in Nepal, he also met then CPN-UML leader K.P Sharma Oli and later he also welcomed Oli as a prime minister of Nepal. Career diplomat and trusted foreign policy advisor of Prime Minister Modi, bitterness expressed by NCP lots against Jaishanker will not serve Nepal's own interest.

The recent moves of Nepali ambassador to India Nilamber Acharya to lobby for submitting the draft report of the Eminent Persons Group to India have not been taken in a good spirit. Last week, ambassador Acharya invited three members of the group including Bhagat Singh Kosiyari, ambassador Jayant Prasad and professor Mahendra Lama at his residence for dinner.

In his recent comment, India's prominent figure Sukh Deo Muni has indicated that India would not accept it because the report is inferior, insufficient and non-academic.

All the recent trends indicate that Nepal India relations are not heading towards the right directions.