Since the establishment of bilateral relations 63 years ago, Russia has supported Nepal by offering higher education opportunities to Nepalese engineers and doctors 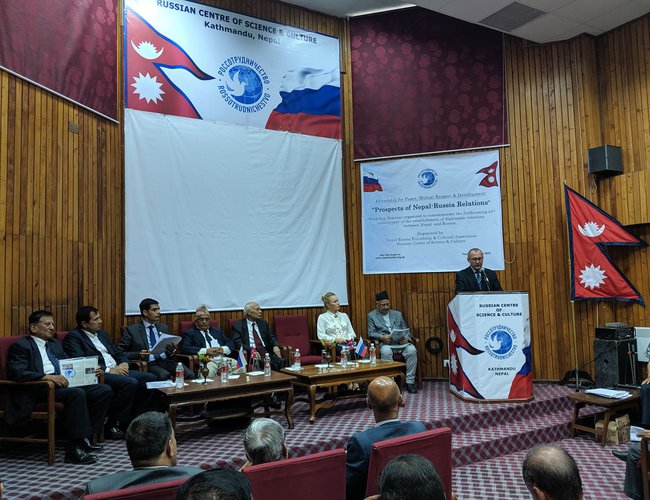 Since the establishment of diplomatic relations 63 years ago, Nepal has continued to benefit from technical universities of Russia. At one period, Nepal’s medical and engineering fields were dominated by engineers and doctors trained in Russia.

At the event inaugurated by Charge d’ Affairs of Russia Yury Yuzhaninov, various speakers highlighted the importance of Nepal Russia relations at the present global context and stressed the need to further promote the bilateral relations.

Delivering the greetings, Charge d’ Affairs Yury Yuzhaninov said that the two countries had always enjoyed substantial and fruitful partnership ties in different areas. He said that he is pleased to note gradual development of economic and cultural cooperation between the two countries.

Bhagawan Ratna Tuladhar, chairman of Association, chaired the function. Charge d’ Affairs Yuzhaninov said that Moscow and Kathmandu have very close positions on many international issues that share the basic principles of goodwill, non-interference into internal affairs of sovereign states and supremacy of international law.

Addressing the program, joint secretary of Ministry of Foreign Affairs Ghanshyam Bhandari said that Nepal government has been giving high importance to relations with Russia. He said that Russia has been supporting Nepal in the areas of training high skilled Nepali technicians.

Presenting the activities of Russian Center of Science and Culture, director Julia Androsova said that this year is a historically important year for the center as it is celebrating forty years of establishment in Nepal.

In his welcome address, chairperson Tuladhar said the objective of the program is to identify the viable areas of trade and tourism promotion with Russian Federation. He also said that the association is ready to facilitate the reopening of Soviet assisted Janakpur Cigarette Factory, Birgunj Sugar Factory and Agriculture Tools Factory.

In the seminar, Professor Dr. Mohan Lohani presented a paper on strengthening Nepal Russia Relations. In his paper Dr. Lohani said that Nepal and Russia have worked together in the UN and other international forums to maintain international peace and security and to promote international cooperation for development, particularly in the interest of all developing countries including the least developed countries like Nepal.

As Nepal and Russia are celebrating 63 years of establishment of diplomatic relations, the workshop gave an opportunity to review the bilateral relationship existing between the two countries.

Ambassador Kikuta Shares The Views With Prime Minister Deuba For Strengthening The Bilateral Relationship Between Nepal And Japan By NEW SPOTLIGHT ONLINE 3 days, 4 hours ago

PM Deuba Urges All Political Parties To Work Together For Nation By Agencies 6 days, 15 hours ago