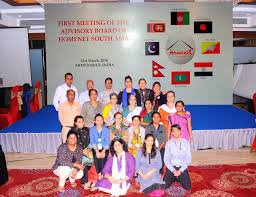 Chandni Joshi, HNSA’s Enforce,r said that the HNSA network is at its core a democratic one and this is its strength. “Our Annual Advisory Board Meeting emphasizes this. The coming year, 2020, is especially significant for HomeNet South Asia since it marks the 20th anniversary of the Kathmandu Declaration that was signed and endorsed by five South Asian nations. We are looking to celebrate the milestone with a global event,” said Joshi

HomeNet South Asia Trust (HNSA) hosted its Fourth Annual Advisory Board Meeting in Kathmandu, Nepal, between September 13 and 14, 2019. The two-day Meeting brought together home-based workers and their representative organizations from seven nations in South Asia.

The 60-member delegation, between September 13-14, 2019, reflected on HNSA’s achievements through the year and outlined a future course of action that would create a positive impact on the lives of millions of home-based workers in the region.

With a membership of close to60 organizations, across eight nations, HomeNet South Asia is a responsive, democratic and representative organisation. Through its Annual Advisory Board Meeting, the Network drafts an agenda of empowerment for women, home-based workers across South Asia. This year’s agendawas steadfastly focused on lending voice and visibility to home-based workers – an invisible but significant workforce in South Asia.

Through the Meeting, HNSA created a platform for home-based workers and their organizations to share their, often, unrecognized work and bring into the spotlight the issues they face while trying to access decent work and livelihoods. The Meeting also saw delegates engage in discussions on the nature of home-based work in each of the countries of South Asia and develop initiatives that will bring better recognition to them. It was noted that while more people were taking up home-based work in South Asia, workers were also involved in other sectors and trades to ensure continuous work.

The HNSA Advisory Board also formulated actions on emerging themes, in the world of home-based work, including, violence and harassment, supply chains, and access to markets. The Advisory Board unanimously emphasised the need for interventions in the area of climate change and resilience that deeply affects the lives of home-based workers in the region. Laxmi BhaluShresta, a home-based worker leader affiliated with SABAH Nepal, says,“Nepal has witnessed devastating floods this year. While, we have received aid from the Government and other agencies, we will need continued support to rebuild our homes that are also our workplaces in order to get back on our feet.”

This year, HNSA kicked-off a regional Visibility Campaign with a robust discussion at the two-day event. The multi-media campaign will, among others, look to promote home-based worker products through a selfie campaign and a ‘Travelling Dhaka Saree Campaign’, in Nepal, that will look to involve women, home-based workers, influencers, and the country’s leading luminaries and dignitaries.

UN Commences International Day of Commemoration In Memory Of The Victims Of The Holocaust By NEW SPOTLIGHT ONLINE 1 hour, 3 minutes ago