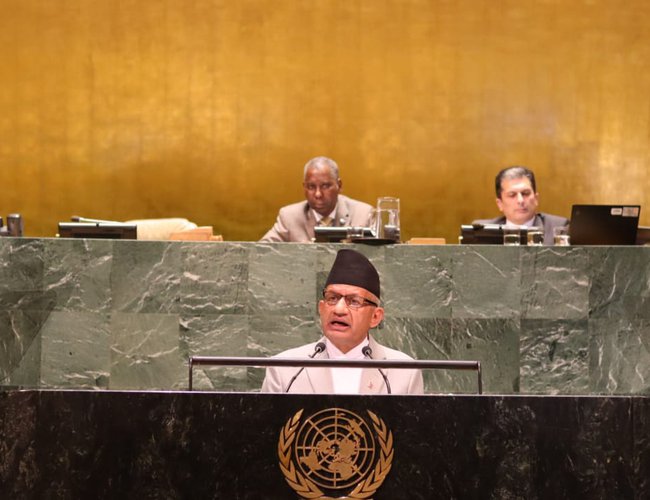 Pradeep Kumar Gyawali, Minister for Foreign Affairs and the Head of Nepali delegation, said that the most vulnerable countries “are hit hardest by the impacts of climate change” and despite “their negligible emissions, they face the consequences” that are not just disproportionate but also unjust and undue.

Highlighting that Nepal lies in the hotspot of climate change, Minister said that the Himalayas will see melting away of one third of the glaciers and drying up of fresh water in an unprecedented pace. The Minister informed the Assembly about the Government’s decision to convene a global dialogue, namely,‘Sagarmatha Dialogue’, to deliberate on critical issues facing the world, including climate change.

Addressing the 74th session of the United Nations General Assembly in New York today, he further added that the adoption of the 2030 Agenda for Sustainable Development was a “display of inclusive multilateralism at its best”. The Minister stressed the need of similar spirit for implementing global agendas.

Underlining the centrality of the United Nations for galvanizing multilateral efforts, the Minister expressed Nepal’s abiding trust in multilateralism, adding that “the only alternative to it is a better, effective, inclusive and responsive multilateralism.

Sharing Nepal’s principled positions on peace, security, disarmament, sustainable development, human rights among others, Hon. Gyawali underlined Nepal’s belief in “peaceful settlement of conflicts and disputes through negotiations and dialogues, and without external interferences”. He reiterated that Nepal commitment to universal values of human rights is total. Similarly, touching upon that fact that Nepal has rendered one of the most dedicated, reliable and professional services to UN peacekeeping over the last six decades, the Minister highlighted the importance of safety, security, and dignity of peacekeepers as well as predictable, adequate and sustained resources for peace operations.

The Minister further said that building on the historic political transformation, Nepal is now focused on economic agenda to sustain political gains under an overarching national aspiration of 'Prosperous Nepal, Happy Nepali'.

Minister concluded by laying emphasis on an empowered and reformed United Nations reflective of the present-day reality can achieve critical responsibilities it confronts today.

On the sidelines today, the Hon. Minister attended the annual ministerial meeting of the Group of 77 and China. In the meeting, the Minister said, “A stronger unity and solidarity will enable the Group to deliver even when there are several multilateral processes happening at the same time”, adding that “leadership by the Group in those processes is critically important to add value on the outcome of such negotiations”. 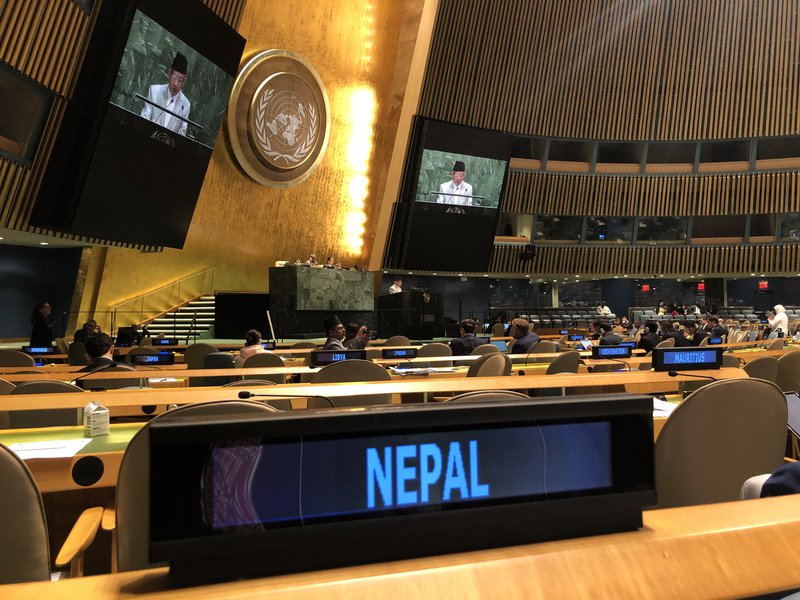 Minister Gyawali attended the Informal Ministerial Meeting of Asia Cooperation Dialogue (ACD) held today morning on the sidelines of the 74th Session of the UN General Assembly. While delivering a statement at the meeting, he highlighted the importance of pan-Asian cooperation for common benefit, taking into account the strength of the region in terms of increasing economic growth rates, sound knowledge base, development of modern technology, an abundance of natural and human resources, and civilization and cultural richness. He expressed the view that the countries of Asia can benefit immensely from the utilization of these potentials of the region through strong bonds of friendship, cooperation, and partnership. He also stressed that concrete activities should be carried out to offer tangible results to the peoples of the Asian region.