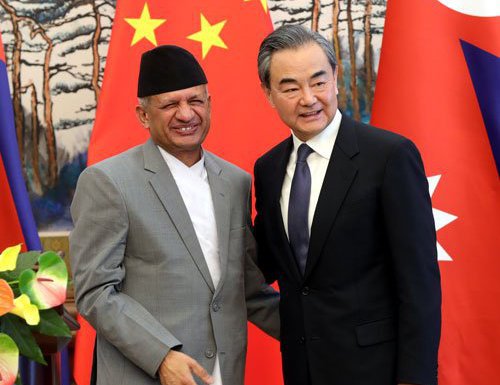 Despite differences over several strategic issues, Nepal's two neighbors India and China have one thing in common. They don't like to see Nepal's involvement in extra-power activities. Although officially no country expresses displeasure over such an issue, they always have the reservation.

Prachanda said this during his meeting with State Councilor and Foreign Minister Wang Yi in Kathmandu on September 10, 2019.

According to the press release issued by Ministry of Foreign Affairs of People Republic of China, Wang Yi expressed, China and Nepal are connected by mountains and rivers and enjoy ever-lasting friendship. China is Nepal's eternal neighbor and will always be Nepal's trustworthy friend. China firmly supports Nepal in safeguarding its national independence, sovereignty and territorial integrity, supports the Nepal Communist Party in leading the Nepali people to choose a development path in line with Nepal's national conditions, and supports the Nepali side in realizing the bright vision of "Prosperous Nepal, Happy Nepali" at an early date.

The Chinese side is willing to, together with the Nepali side, speed up the joint building of the Belt and Road Initiative, deepen practical cooperation in various fields, strengthen exchanges of experience in state governance and administration, and continue to provide strong support and assistance for Nepal's national development. The development of China-Nepal relations is now facing new historical opportunities. It is believed that the Nepal Communist Party can make significant contributions to advancing the comprehensive cooperative partnership featuring ever-lasting friendship between the two countries to enter a new stage and open up new prospects.

According to Ministry of Foreign Affairs of People’s Republic of China, Puspa Kamal Dahal expressed, Nepal firmly adheres to the One China policy not only verbally, but also in action, and will not allow any external force to engage in anti-China activities in Nepal. Hong Kong affairs are China's internal affairs, and the Nepali side opposes any interference by certain forces in Hong Kong affairs and also opposes obstructing China's fight against terrorism in the name of human rights.

The release said quoting Prachanda that Nepal has always believed that China's development is an opportunity for Nepal, and is willing to learn China's successful experience. Nepal attaches importance to China's international status and stands ready to work with the Chinese side to safeguard multilateralism and promote globalization in a balanced, universally beneficial, inclusive, and win-win direction.

The Nepal Communist Party congratulated the Communist Party of China on leading the Chinese people to make the great achievements over the past 70 years, and is willing to board the express train of China's development, earnestly implement the building of the Belt and Road Initiative with the Chinese side, constantly deepen all-round cooperation between the two countries, and promote the building of a community with a shared future for China and Nepal.

Minister for Foreign Affairs Pradeep Kumar Gyawali and State Councilor and Minister of Foreign Affairs of the People’s Republic of China Wang Yi reviewed all important aspects of bilateral relations during the high level talks.

They expressed satisfaction over the expanding and deepening relations between Nepal and China in recent years and agreed to further promote co-operation in various areas of mutual interest.

The two sides also exchanged substantive views on promoting bilateral economic cooperation with special focus on trade, investment and tourism. Both sides underscored the importance of the exchange of high level visits on a regular basis in order to develop mutual trust and confidence, and to further strengthen bilateral relations.

The two Foreign Ministers agreed to implement the agreements and understandings reached between two sides in the past. They also agreed to continue cooperation in various regional and multilateral forums on matters of mutual interests.

Memorandum of Understanding was exchanged following the bilateral meeting between Nepal and China. Under the understanding, China will support the Hospital Recovery Project in Manang and provide 5000 pieces of emergency shelter tents to Nepal government.

Minister Gyawali appreciated China’s continued support for Nepal’s socio-economic development and underlined the need of strengthening cooperation in the fields of connectivity, infrastructure, energy and education. State Councilor and Minister of Foreign Affairs of China assured of Chinese support to Nepal’s development endeavors.

At a time when China and India have pledged to step up their cooperation in areas such as the economy, technology and drug development in the sixth India-China Strategic Economic Dialogue held last week, Chinese foreign minister Wang Yi has just expressed its own concern.

As Wang Yi's visit came about a month before a visit by Chinese President Xi Jinping to India for an informal summit with Prime Minister Narendra Modi, Chinese Mandarian avoided all the controversies.

Zhao Gancheng, a South Asia studies specialist at the Shanghai Institute for International Studies, said neither India nor China wanted to let any dispute get in the way of their gradually improving relations.

"At a time when uncertainties are looming large in global economy, it is in both countries’ interest to set aside differences and focus on economic cooperation … the differences [in China-India relations] are difficult to resolve in a short time anyway,” she said.

Pampha Bhusal and Amresh Kumar Singh reportedly represented two different blocks. Bhusal is regarded as anti-Indian and Singh as Pro-Indian. However, both have a common voice so far as Indo-Pacific Alliance is concerned.

Nepal And India To Give Priority To Butwal-Gorakhpur Transmissionline By NEW SPOTLIGHT ONLINE 2 days, 19 hours ago

UNHCR Shut Down Its Bhutanese Refugee Office In Nepal By Agencies 3 days, 10 hours ago