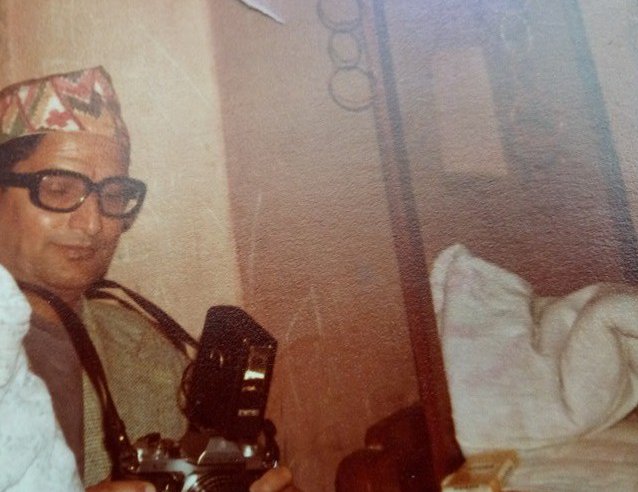 We are grieved to learn rather belatedly from one of our close friends that Ranjan Raj Khanal, Principal Secretary to King Birendra and considered to be one of the most powerful persons of his time, passed away on Friday, October 04, 2019.

Son of Harsha Nath Khanal of Tripureshwar Panchakuti, and younger brother of poet Guna Raj Sharma Khanal "Ramdas", late Khanal is survived by two sons, Mandar who served in the Department of Roads prior to his decision to migrate to the United States, and Saket, and a daughter.

His daughter Kaanchan Mala Chalisey was once the high-profile deputy mayor of Kathmandu municipality. Her husband was Bidyut Raj Chalisey who retired as Secretary with early assignment in the Foreign Ministry including a stint in Kolkata. People familiar with him used to call him electricity translating Bidyut into English as he was a man of quick sliver temperament and unpredictable mentality.

One of Khanal's brothers-in-law Sardar Ishwari Raj Mishra served the country as both diplomats and judge for a long time, a rare combination. Mishra once told me that he had equal years in both diplomacy and judiciary. A Supreme Court judge, Mishra was head of Buying Agency in Kolkata, First Secretary and Counsellor in London, Ambassador to the UK and Pakistan and Under-Secretary in Foreign Ministry.

He was a student of MA BL in Kolkata where he was directly employed as the head of the Buying Agency in succession to his elder brother Lok Raj Mishra on his return from the city, as the junior Mishra had told me once during our several meetings at his residence at Kopundol.

A bright product of his time, Khanal was a topper in the School Leaving Certificate examination held in 2001 BS, which is 75 years ago. Besides his rich administrative experience as he was inducted into the Royal Palace Service after his promotion to the post of Secretary in the Government of Nepal, Khanal was considered an authority in religious and spiritual fields. It is a rare combination in a person to have the collective attributes of a spiritual thinker, dyed in the wool bureaucrat and a background mobilizer of national politics.

Though a very powerful figure with a considerable say in the national decision-making, Khanal was a strong-willed but soft-spoken and modest man and preferred to stay in low profile despite the fact that he used to steal public limelight somehow or the other even in the then controlled era of journalism. As he used to frequent Kolkata at least once a year on compulsory vacation that used to be the norm in the palace administration in those days, I had the honor to accompany him to several temples, spiritual leaders and bookshops. A voracious reader, he used to buy books mostly related to biographies and autobiographies and religious texts.

In my first and only visit to his residence at Maharajganj, I found his house to be a beehive of activity as far as the assemblage of different types of people were concerned. I vividly recollect Prime Minister Surya Bahadur Thapa once talking about Ranjan Raj Khanal in course of appreciating the acumen and foresight of King Mahendra during his visit to India in the late nineties. According to him, the late King had specially chosen two senior bureaucrats from the Government of Nepal for absorption into palace service, not a very usual phenomenon as inductees at the lower level used to be regularly promoted to the higher ladder of service than deputation from outside.

They were late Khanal and Kalyan Bikram Adhikary. Adhikary rose to the highest level in royal palace service echelons and later assumed posts as Governor of Nepal Rastra Bank and ambassador to France where he died in harness. One of the closest friends sharing spiritual and religious bent of mind of Khanal but at least a generation old is the former Secretary and Auditor-General Narakanta Adhikary taken as a model civil servant of integrity and humility.

As the country has lost an intellectual celebrity in the demise of Khanal, we extend heartfelt condolences to the bereaved family and pray for peace to the departed soul in heaven.

Niranjan Koirala Is No More By A Correspondent 1 month, 4 weeks ago

In Memory Of Dr. Sukhdev Shah By Ambika P. Adhikari 4 months, 2 weeks ago

Yagya Prasad Acharya Is No More By NEW SPOTLIGHT ONLINE 5 months, 1 week ago