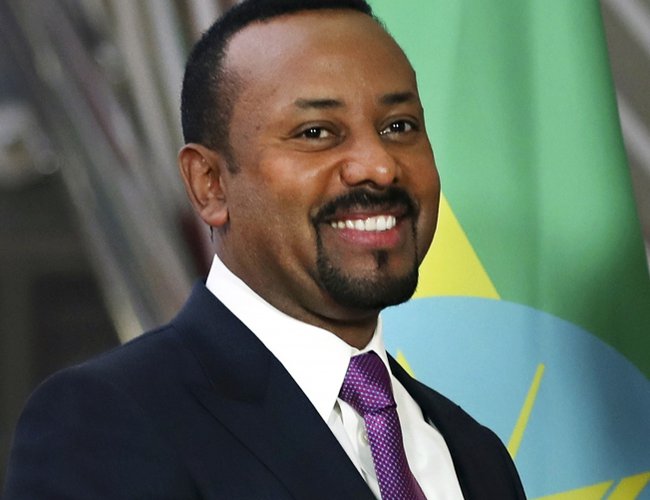 Though Africa’s youngest leader still faces big challenges, he has in under two years in power begun political and economic reforms that promise a better life for many in impoverished Ethiopia and restored ties with Eritrea that had been frozen since a 1998-2000 border war.

“I am so humble and thrilled . It is a prize given to Africa, given to Ethiopia,” Abiy Ahmed said in a recorded phone call with the secretary of the award committee that was posted online.

Abiy was meeting Sudanese Prime Minister Abdalla Hamdok when he was informed he had won the prize, Abiy’s spokeswoman said.

The Nobel Committee said Abiy had won the prestigious prize for “efforts to achieve peace and international cooperation, and in particular for his decisive initiative to resolve the border conflict with neighboring Eritrea.”

It said the prize was meant to recognize “all the stakeholders working for peace and reconciliation in Ethiopia and in the East and Northeast African regions.”

News of the award trickled slowly down to the streets of the Ethiopian capital, Addis Ababa. Bisrat Hadte, a 45-year-old businessman, said he was glad but the government still had much to do to improve daily life in the country of about 100 million.

“The prime minister also has to work on to improve the economy and drive down the cost of living,” he told Reuters.

The Nobel Committee’s decision appeared designed to encourage the peace process, echoing the 1994 peace prize shared by Israeli and Palestinian leaders and the 1993 award for moves towards reconciliation in South Africa, said Dan Smith, head of the Stockholm International Peace Research Institute.

“It is a case of wanting a constructive intervention in the peace process ... to give leverage and encouragement,” he told Reuters.

“I have said often that winds of hope are blowing ever stronger across Africa. Prime Minister Abiy Ahmed is one of the main reasons why,” said United Nations Secretary-General Antonio Guterres.

“His vision helped Ethiopia and Eritrea achieve a historic rapprochement.”

Abiy, now 43, took office in April 2018 after the resignation of Hailemariam Desalegn following three years of violent anti-government protests. The ruling coalition had already begun making conciliatory measures, including releasing many political prisoners, but Abiy speeded up the reforms.

His government has promised to liberalize the bureaucratic, state-controlled economy, unbanned many political parties and dismissed or arrested many senior officials accused of corruption, torture or murder.

The changes are the most sweeping since the coalition took power in 1991, and the loosening of the state’s iron grip has raised hopes in the country and abroad.

Abiy’s landmark achievement to date is securing peace with neighboring Eritrea. What remains to be seen is whether Abiy - who joined the Ethiopian army in his teens and rose through the ruling EPRDF coalition over the past two decades - can control the political forces he has unleashed.

He faces challenges from elements within the ruling coalition who feel disempowered and from new, ethnically-based parties eager to flex their muscles in next year’s elections.

The loosening of political freedoms means many regional powerbrokers are demanding more influence and resources, fueling ethnically-tinged conflicts around the country.

In June, a rogue state militia leader killed the state president of the Amhara region and other top level officials in what the government described as a regional coup attempt.

Desalegn Chane, president of the new National Movement of Amhara (NAMA) party said three of his party’s leaders were still in jail, held without charge and suspected of being linked to the violence.

“As an Ethiopian, actually, I am very happy that the prime minister won the Nobel peace prize,” he told Reuters by phone.

“However, we still have legitimate concerns and grievances that Abiy needs to address. The political repression our people the Amhara have been suffering from has continued under Abiy.”

The Nobel Peace Prize will be presented in Oslo on Dec. 10, the anniversary of the death of Swedish industrialist Alfred Nobel, who founded the awards in his 1895 will. It is worth nine million Swedish crowns, or around $900,000.

This year’s award is the 100th Nobel Peace Prize award since 1901, when Henry Dunant, a founder of the Red Cross, and the French parliamentarian and peace activist Frederic Passy shared the first one. No awards were made on 19 occasions, including during the two world wars.

Over 10 Reportedly Killed In Myanmar Protests By NEW SPOTLIGHT ONLINE 2 days, 9 hours ago

Elections Is Just A Month Away: Alliance Is Making Is Making By Agencies 5 days, 8 hours ago

US Carries out Airstrikes In Syria By Agencies 5 days, 8 hours ago