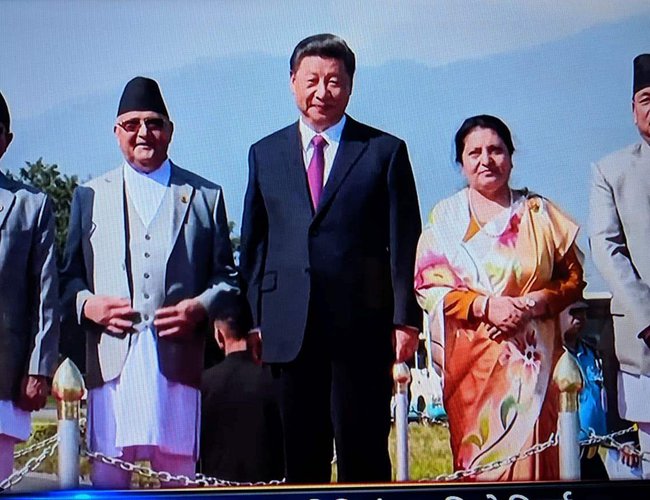 Well before Delhi absorbs the meaning of Prime Minister Narendra Modi’s second informal summit with Xi Jinping, it will have to come to terms with the Chinese leader’s grand plans to build a trans-Himalayan corridor between China and Nepal. One special focus of the corridor is a railway line that will connect Tibet’s capital Lhasa to Kathmandu and run eventually to Lumbini, the birthplace of Lord Buddha close to the Indian border.

The question of Beijing’s support for Islamabad on Kashmir may have dominated India’s recent discourse on China. Delhi, however, might be compelled to pay attention to the equally consequential developments unfolding in the relationship between China and Nepal.

Pretty soon too. President Xi flew to Kathmandu after wrapping up the meeting with Modi on Saturday afternoon. In Nepal, there are soaring political expectations of a dramatic transformation in bilateral relations. It is no secret that the current government in Kathmandu led by Prime Minister K P Sharma Oli wants to elevate the relationship with China as part of his well-known commitment to greater ‘strategic autonomy’ from Delhi.

In Kathmandu, Xi was accorded a welcome unprecedented in recent history, with Oli, his entire Cabinet, as well as President Bidhya Devi Bhandari lining up at the Tribhuvan International Airport as he arrived on a special aircraft for the two-day State visit. The government had issued instructions to all its employees to line up along the route that Xi took to his hotel from the airport.

China, which has always been eager to have the same special relationship with Nepal as India, appears ready to seize the moment. It is the first visit to Nepal by the top Chinese leadership in nearly quarter of a century. The last Chinese premier to visit Nepal was Jiang Zemin in 1996.

In an op-ed published in three Nepali papers on Friday, Xi said his main objective is to “draw up a new blueprint for bilateral ties”. Celebrating the historic and civilizational relationship with Nepal, Xi did not forget the message that Chinese leaders always take to Delhi’s neighbouring capitals. Xi said, “China firmly supports Nepal in safeguarding national sovereignty, independence and territorial integrity and in pursuing a development path tailored to its national reality”. Beyond the reaffirmation of that support, Xi referred to the growing commercial ties and growing Chinese tourism in Nepal.

The Chinese leader noted that “Nepal has been an active participant in the Belt and Road Cooperation” and that their collaboration on a number of infrastructure projects, including highways, dry ports, airports and power plants, is helping shape the emergence of “a trans-Himalayan connectivity network”.

Although Xi did not directly mention the railway line, there is strong speculation that he might announce an agreement on extending China’s Tibet Railway into Nepal. This is a project that has been under discussion for many years.

Phase one of the project is expected to get the railway across from Gyirong on the Tibetan side to Rasuwaghadi in Nepal and from there to Kathmandu. In a planned second phase, China and Nepal would like to extend it to Lumbini.

The project was initially derided as fantasy, given the nature of the terrain on the Nepal-Tibet border, the environmental costs, and above all a prohibitive price tag. China seems confident that the engineering challenges can be overcome, though the question of price remains open.

The rail line from Rasuwaghadi to Kathmandu is expected to cost nearly $2.7 billion. There is no publicly available detail on how much of that cost China might finance and on what terms. Some in Kathmandu fear that the project might push Nepal into a debt trap with China. Others worry that the project is being driven by foreign policy considerations (read balancing India with China) rather than its specific costs and benefits. This week PM Oli met a number of former prime ministers and assured them that his government would not barter Nepal’s national interests.

As Xi and Oli discuss the CNEC, the elephant in the room is PM Modi. It is no secret that Delhi is wary of China’s infrastructure projects in Nepal. On its part, Beijing has often suggested that India must be part of the CNEC; for many projects will not be commercially viable without India’s participation.

In a likely recognition of India’s concerns, Xi did mention in his op-ed piece that the trans-Himalayan connectivity network will “serve not just our two countries but also the region as a whole”. Although Delhi and Beijing apparently did talk of third-country projects in Wuhan, it is not clear if Nepal projects have figured in the official discussions. There is also no indication so far that Delhi is softening on its declared opposition to the BRI (Belt and Road Initiative) projects, especially in India’s neighbourhood.

In any event, the outcome of Xi’s visit to Nepal and India’s reaction to it could mark a definitive moment in the evolution of the complex triangular dynamic between Beijing, Kathmandu and Delhi.

The writer is Director, Institute of South Asian Studies, National University of Singapore, and contributing editor on international affairs for The Indian Express

Xi shared with Modi that when he lands in Kathmandu for a State visit, he would become the first Chinese President to visit Nepal in 23 years. Interestingly, when Modi visited Nepal in 2014 for a bilateral summit, he was the first Indian PM to visit the Himalayan kingdom in 23 years as well.

Ukraine Says Its Forces Pulled Out Of Lisichansk By Agencies 12 hours, 9 minutes ago