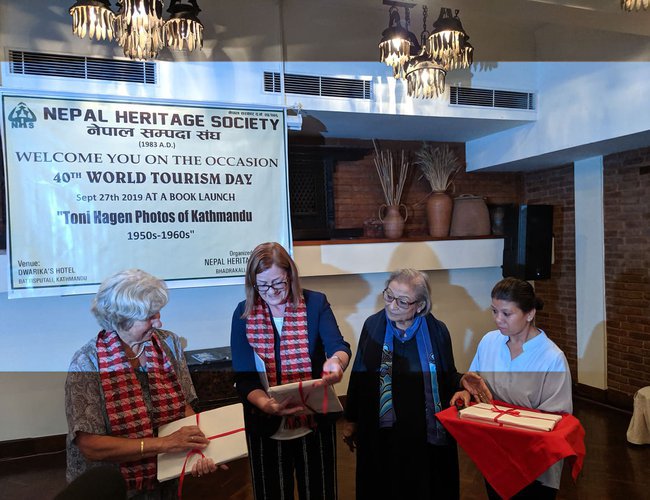 Although President of Nepal Heritage Society Ambica Shrestha is 87, her age does make no difference to her mission to promote Nepal's culture, heritage and personalities, who have made contributions to Nepal.

At a time when many younger generation Nepalese are gradually forgetting the name of a great personality from Switzerland Geologist late Tony Hagen and his works, Shrestha has decided to publish a book Toni Hagen: Photos Of Kathmandu Valley (1950-1960).

Bringing people from different walks of life together, president of Dwarika's Hotel Shrestha organised a program to release the historically important book.

Addressing the book launching ceremony, chairman of Nepal Heritage Society and Dwarika’s Ambica Shrestha said that the book gives past glory of Nepal and its natural surroundings of 1950s.

Launched on the occasion of 30th World Tourism Day 2019 to promote what Kathmandu Valley was in 1950s, ambassador Veronica also highlighted the important role played by Hagen. 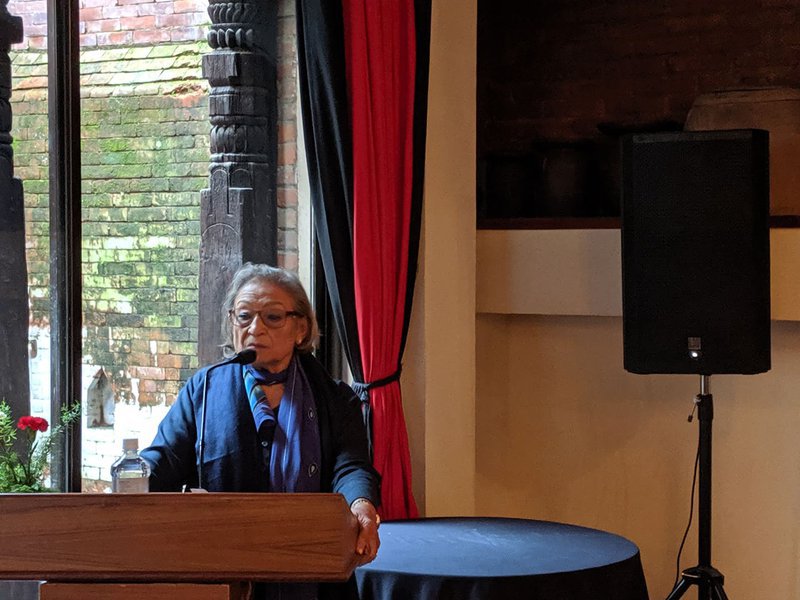 "I would like to begin by thanking the President of the Nepal Heritage Society, Ambika Shreshta, for inviting me to open this book launch of Toni Hagen's book of photos of the Kathmandu Valley 1050-1960," said ambassador Veronica. "In doing so, dear Ambika, you did me a great favour, because you introduced me to this important figure in Nepal's history, Dr Toni Hagen, and to the invaluable work he conducted in this country."

She said that in carrying out the first geological survey of Nepal, he walked more than 14,000 km and in documenting the findings of his travels, and sharing his views on society and the economy, which are to be found in his book "Nepal: the Kingdom in the Himalaya."

She also said that his contribution to the work of the Red Cross, particularly in the aid and resettlement of Tibetan Refugees in Nepal.

"I understand, they would not exist if it were not for the hard work of Dr Katrin Hagen, Toni Hagen's daughter, in sorting through her father's photographs and archives. We should be grateful to her, and to Dr Poonam Rana for her research and for writing the text accompanying the photographs, because the result is a veritable treasure – a testimony to life in the Kathmandu Valley of the 1950s," said Ambassador Veronica.

Highlighting the importance of the Book she said, "I cannot do better than to draw from Dr Hagen's own words, in her preface to the book, when she explains that in the early 50s, the population of the Valley was only about 300,000 people, with little or no industry outside the cities, where the main activity was farming. There were only a few cars on the few roads, no water supply, no sanitary facilities. But the 50s introduced the modernisation of the Valley, and so the book documents, through photographs, the days before such change took place.

These photographs are artistically beautiful and sensitively focused; they are also instructive. They show the architecture of private houses, of holy temples, of public squares; they show the incredible landscape that framed the way of life of country and city folk; they show the people of the Valley at work and at play - going about their daily chores, celebrating festivals, conducting Pooja and other traditional rituals, tending their animals, carrying their burdens, at prayer, or at the market. They show the sacred, and the quotidian. There is much that is familiar to our modern eyes, and yet we are left with a lingering feeling that a certain way of life has passed.

This is truly an amazing book, and represents an important contribution to the cultural heritage of Nepal. Reading it was a joy, and an experience I can heartily recommend to you all.