Demise Of A Legend 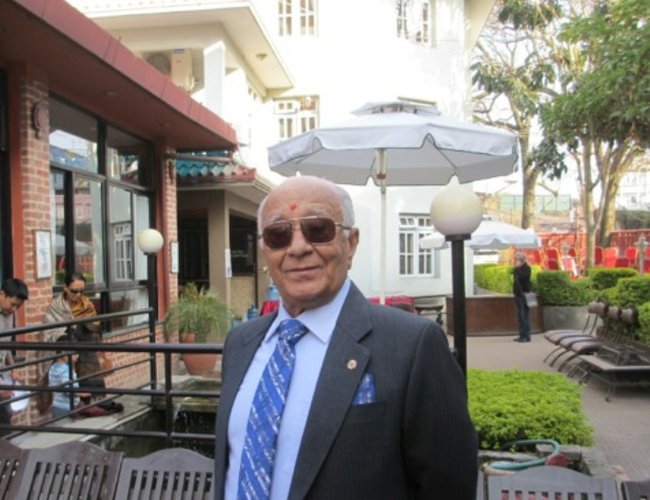 We are very sad to know that Madhukar Shumshere Rana is no more. As we used to have extremely cordial relations, we used to call him Madhukar Raja in line with our habit of addressings Ranas in course of our collecting precious information from many members of the extended Rana family about various aspects of Nepal's history particularly relating to Nepal's foreign affairs.

A kidney transplant patient for quite some years, he was a gem among human beings. True to his name, Madhukar literally meaning wasp or collector of honey, he was a scholar par excellence and an expert in public relations. He had completed 78th years but was quite active until few weeks ago. Our heartfelt condolences to Greta Maharani and members of the bereaved family.

Madhukar was a development economist and a visiting professor having access to topmost institutions of the world. He studied in India, Switzerland and Canada. He served as the Finance Minister of the country. He had started his career at CEDA, once an elite thinktank and now almost forgotten institution of Tribhuvan University itself facing onslaught from both sister universities most of them trying to encroach on its precincts both literally in terms of academic disciplines, range of courses and even physical properties. We also have a tendency including on the official aspects to set up one institution against the other on various pretexts but making a mess of both the old and new.

He was also associated with the National Trading Limited, once a prestigious public sector undertaking started as a launching pad for undertaking major Chinese projects many of them are now extinct as that of the status of National Trading Limited itself, a sad commentary when we are talking so many things about possible bilateral cooperation on a strategic scale whatever it may mean given our context of not being seriously concentrated on anything. He had other interests including heritage conservation, promotion of Nepal-Britain relations as President of Nepal-Britain Society and management affairs.

Madhukar Raja is remembered for many things including sports and hospitality industry. Let us now concentrate on his role in terms of foreign affairs. We reminisce his visits on this score a number of times. He was adviser to the Minister for Foreign Affairs twice and was quite instrumental in drafting his own concept on economic diplomacy and submitted a comprehensive report. It is a different matter how far and in what way we tried to implement such reports in the past and even now. He was also active as members of different task forces set up with a view to submitting recommendations for revitalizing our foreign ministry.

Since we give attention to family history too as we are a bit old-fashioned with superstitious outlook, let us talk about his family too in brief. He was the great grandson of Prime Minister Juddha Shumshere and grandson of Man Shumshere (born in 1889) who had passed away in 1941, the year Madhukar was born (July 19). He was the son of General Maheshwar Shumshere who passed away in 1982, and Hem Kumari Devi. It may also be mentioned that Man Shumshere was the first son of Juddha Shumshere and was born when his father was hardly 14. It is a different matter that his parentage was acknowledged much later and was not on the so-called Roll of Succession in line to the hereditary system of prime ministership.

While Man Shumshere was taken as an expert on economic and management matters in traditional sense as told to me by his half-brothers, Field Marshal Nir Shumshere and Commander-in-Chief Kiran Shumshere, his death was itself significant in the sense that Juddha had used this to bring social reform in the country. Juddha ordered that mourning should end on thirteen days instead of one year as used to be observed earlier. Juddha probably thought that it would be much practical to start such practice from his family itself.

As we are very grieved on the sad demise of our great friend and well-wisher who used to inspire us for a long time, we once again extend our heartfelt condolences on this irreparable loss and wish the departed soul peace in heaven.