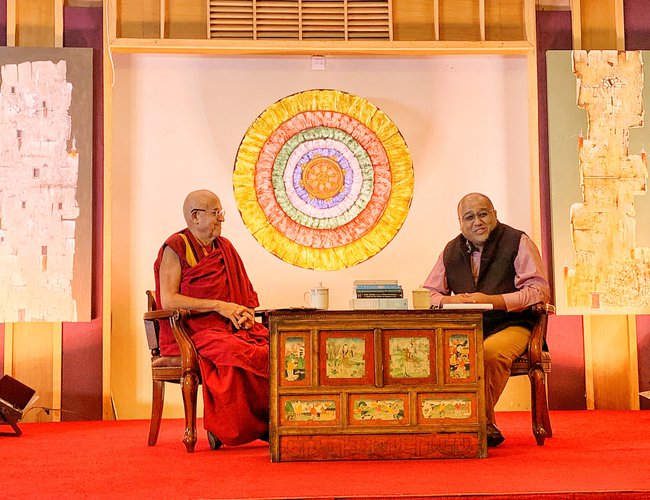 French Buddhist monk and writer Matthieu Ricard admired the resilience of Nepali people as they get through everything in life. There has not been lasting hatred and believes that it is a part of the Nepali culture.

In a conversation with Sujeev Shakya, Ricard highlighted that a common platform, even before religion, is goodness and a good heart that is most needed for people to come together despite the challenges of technology. In Ricard’s point of view, artificial intelligence is a method of calculation and not a being and hence no element of the experience.

In a series of debates and talk programs designed to stimulate thinking and get the ideas and knowledge flowing, a joint event was organized by the French Embassy in Nepal and BEED Knowledge Center on the “Future of Compassion in the context of Artificial Intelligence and Technology.”

Sujeev emphasized that technology has encroached our life at an unprecedented level, resulting in a conflict with our notion of a shared world and a shared future.

The conversation started with the French Ambassador to Nepal François – Xavier LEGER giving the opening remarks.

The attendees included Heads of Mission and representatives from various embassies, researchers, students and people from the private sector.

The French Embassy and the BEED Knowledge Center thank Bidhata KC for providing the artworks, Swosti Rajbhandari Kayastha for curating and Karuna-Shechan for supporting the event.