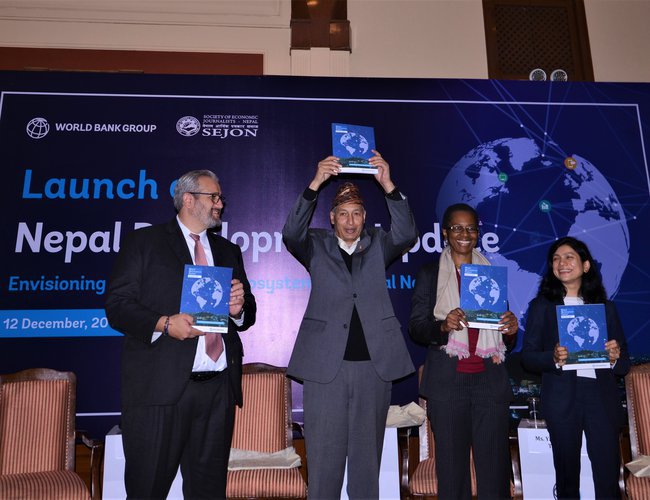 As there is a growing concern over whether Nepal will grow over 6 percent or less, World Bank’s latest Nepal Development Update projects Nepal’s growth over the medium term to average 6.5 percent supported by a strong service sector

The report said that Nepal continues strong growth and highlights the importance of data for development in a federal Nepal. This report gives a sigh of relief to the government.

Nepal’s economic data of first four months was not encouraging to sustain growth. Although Nepal has reduced import, Nepal is yet to improve the export to narrow the gap. Similarly, the capital expenditure is below 10 percent, it will likely to affect overall economic activities.

“The need for Nepal is data that is disaggregated, more frequent, reliable and accessible,” said Dr. Yuba Raj Khatiwada, Minister of Finance. “Nepal’s federal structure has added another dimension for data at the provincial level, which is a challenge but very important for development programs to leave no one behind. The Statistics Act which is to be approved soon is expected to further empower the Central Bureau of Statistics and provide added responsibility to subnational governments on data for national policy making,” he added.

The World Bank’s Nepal Development Update launched projects continued strong growth with an average annual rate of 6.5 percent in the medium term, driven by investments in the tourism sector, particularly the Visit Nepal 2020 program, including efforts to increase air connectivity. Industrial growth is likely to be supported by construction activities, investments in the cement and hydropower sectors, and improved capacity utilization in the manufacturing sector.

The Nepal Development Update notes that import growth will slow down as the government implements its program to keep the fiscal deficit in check. This should help contain the trade deficit. Inflation is expected to pick up slightly but will remain below 5 percent during the forecast period assuming stable agricultural production, regular supply of electricity, and low inflation in India. The focus going forward will need to be on strengthening exports.

“Increased exports will be critical to sustained growth over the medium-term. It will be important for government to continue with reforms to attract foreign investment,” said Dr. Kene Ezemenari, World Bank Senior Economist, who led the team that produced the update. “To effectively support Nepal’s growth aspirations, future reforms will need to be grounded in strong analysis and data,” she added.

The Nepal Development Update highlights the importance of data for development, particularly in the context of the country’s historic transition to federalism. Federalism has created a surge in demand for more and better data.

Enhanced data availability is needed to strengthen planning and budgeting at the subnational levels, including the preparation of Medium-Term Expenditure Frameworks. In addition, the transfer of fiscal resources to sub national levels also requires data on several parameters. A robust federal framework therefore rests on more and better data that will support evidence-based policies.

In its Special Focus section, the report articulates a vision for a future data ecosystem and the need for short-term reforms to make the most of existing data and long-term reforms that establish an enabling environment that fosters data sharing, integration and use. Measures that can be implemented in the short-term include the publication of data in machine readable format, and the development of a comprehensive data dissemination policy and open government strategy.

“Data is central to the success of federalism. Nepal needs a vision and strategy for a future data ecosystem that is aligned to the new federal structure and promotes engagement of civil society and the private sector,” said Faris Hadad-Zervos, World Bank Country Manager for Nepal.

“Engaging all data actors – including civil society, the private sector and government agencies at various levels – can play a greater role in data production, sharing and use. This would help in the design of reforms for better service delivery to citizens and an improved business and investment climate.”

ADB PROJECTION: Nepal To Grow By 3.1% By A Correspondent 3 days, 18 hours ago