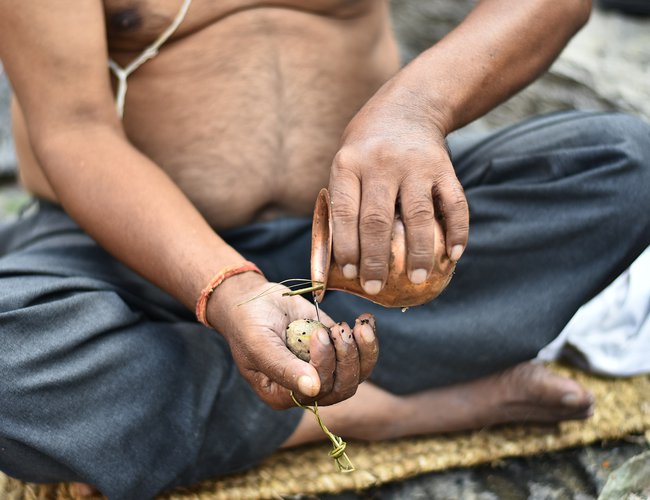 Nepali Hindus are observing Paush Amavasya Performing Shraddha at different place of Nepal and India. Today is the day when a large number of Nepalese Hindus visit Gaya in Bihar India to perform Shradha. It is believe that performing Sharadha at Gaya will have a great significant.

During Paush Amavasya tarpan, Shradha and rituals are performed to invoke the blessings of the ancestors and seek their blessings for a peaceful and prosperous life.

What are the Benefits of Performing Paush Amavasya Rituals and Observing Fast?

A number of rituals are performed on Paush Amavasya including puja, prayers, donations.By performing various pujas on Paush Amavasya one can eliminate the deadly diseases as well as can recover from various severe health-related problems.

Individuals perform rituals and do pujas in order to prevent premature death.

It helps in improving prosperity and promoting stability in the family as well as also helps in promoting the business too.

By performing rituals and observing a fast on this day, individuals get bestowed with the blessings of the dead ancestors as well as the deities.

Paush Amavasya is a highly significant religious observance which is performed by Hindus worldwide.

According to the Hindu calendar, Paush month (also known as Pushya maas) is the tenth month which is considered highly significant for worshipping gods and performing rituals for the dead ancestors. The Paushya month is also well known as the Paush Masam of the Sowbhagya Lakshmi Masam.

As per the scriptures and Hindu mythology, it is believed that it is auspicious to worship Dhana Lakshmi and Dhanya Lakshmi which are the two forms of Goddess Lakshmi on the eve of Paush Amavasya in order to get bestowed with their divine blessings, abundance and wealth.

What is Amavasya or the No-moon day?

As per the Hindu calendar, there are a total of 30 Tithis (lunar) and Amavasya is observed in mid of every month. Amavasya is also known as No-Moon Day as on this day, the moon is completely invisible from the sky. It is one of the darkest nights of the month.

What is Paush Amavasya?

When the no moon day or the Amavasya is observed in the specific month of Paush according to the Hindu calendar, then that particular Amavasya is called as Paush Amavasya. It is considered as an inauspicious day when the negative energies and evil powers are stronger in comparison with other days. Paush Amavasya is regarded as highly pertinent for performing Shradh and Tarpan for the dead ancestors. It is a day when black magic is performed with higher intensity.

When is Paush Amavasya?

Paush Amavasya is observed during the Paush month on the 15th day of the dark fortnight according to the Hindu calendar. The day falls in the month of January or December as per the Gregorian calendar.

What is the Astrological Significance of Paush Amavasya?

By donating clothes and food or performing the Ann and Vastra Daan on the particular day of Paush Amavasya, the devotees can decrease the ill-effects of planets Ketu, Rahu, Shani, and Jupiter. Natives who are under the Antardasha or the Mahadasha of these planets can attain benefits by doing donations and charity on Paush Amavasya.

How to Get Relieved from Shani Dosha and Pitra Dosha on Paush Amavasya?

For the individuals who are suffering from Shani Dosha or Pitra Dosha, Paush Amavasya is a significant day for observing the shradh ceremonies of the forefathers and deceased ancestors. Til Daan, Vastra Daan, Ann Daan, Pind Daan or any other form of Daan can be performed at the river bank, pilgrim spots, and temples to seek the blessings of ancestors. All such acts must be done under the guidance of learned priests so that they are done right and to attain utmost benefits out of it.

How to Eliminate the Malefic Effects of Planets on Paush Amavasya?

To eliminate or reduce the ill-effects of the malefic impact of Jupiter, Shani, Ketu, and Rahu, one should donate clothes and food on this day (vastra daan and anna daan)

The individuals must do Bhandara of khichdi on Paush Amavasya in order to save oneself from the negative impact of black magic and evil spirits.

The natives can overcome the ill-effects of Dhaiya troubles, Shani Sade Sati and Shani dosh by performing adequate rituals and reciting prayers on Paush Amavasya.

Natives can reduce the intensity of the malefic effects of Jupiter and Kaal Sarp dosha by performing donations, charity, puja and observing fast on Paush Amavasya.

With information from Mpanchang

Parshuram Jayanti 2021: Rituals And Significance By Agencies 21 hours, 4 minutes ago

Hanuman Jayanti 2021: Importance And Significance By Agencies 2 weeks, 3 days ago

Mahavir Jayanti 2021: Celebrating The Birth Of The 24th Tirthankar By Agencies 2 weeks, 5 days ago

Ram Navami 2021: Its Importance And Significance By Agencies 3 weeks, 2 days ago

India Announces All Above 18 Years Eligible For Covid-19 Vaccination From May `1 By Agencies 3 weeks, 2 days ago