12 Killed In Plane Crash In Kazakhstan

12 Killed In Plane Crash In Kazakhstan 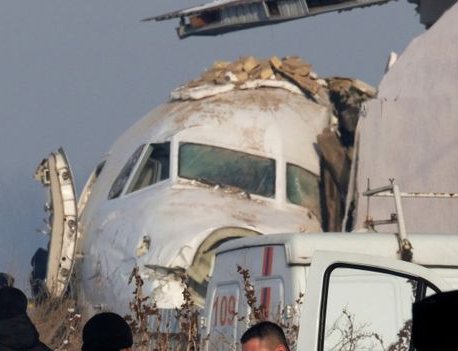 A passenger jet has crashed in Kazakhstan, killing at least 12 people but leaving dozens of survivors.

The Bek Air plane was flying from Almaty - Kazakhstan's largest city - to the capital Nur-Sultan when it smashed into a building just after take-off.

The Fokker 100 aircraft had 93 passengers and five crew members on board. Survivors described walking from the wreckage into the dark and snow.

Dozens are being treated in hospital. The cause of the crash is unclear.

The interior ministry initially said 15 people had been killed, but it later revised the number of victims down to 12.

Most of the passengers who died or suffered serious injuries were in the front part of the plane.

Eight people died at the scene, two while being treated at the airport and two in hospital, AFP news agency reports.

Some 67 people were injured in the accident, nine of them children, the health ministry said. Forty-nine were still in hospital on Friday evening, of whom eight people were said to be in a critical condition.

Kazakhstan's aviation committee has suspended all Bek Air flights as well as those involving Fokker 100 aircraft pending the results of the investigation.