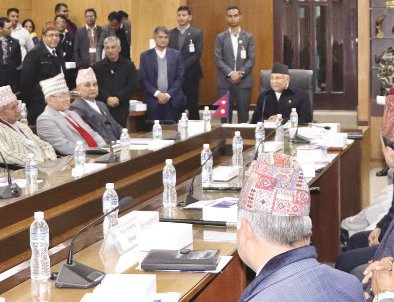 Inaugurating the portal, Prime Minister Oli said that the government is committed to controlling human trafficking, drug trafficking, money laundering, and activities posing challenges to maintain peace and security in the country.

The Rising Nepal reports that Nepali Port’ software was designed and brought into operation from Monday at the TIA and 12 other border points of Nepal with the help of Nepali engineers and technicians at a cost of Rs. 8 million in one year period of preparation.

The daily said that the newly launched Port is completely a real time data-based information sharing and collection of the records of every individual and those possible criminal groups whose track records were not good across the country. Also, this port will keep record of those Nepali citizens going for foreign employment and students going abroad taking no objection letters.

The daily reports that the Nepali Port will have that system which can read and show the picture of all those criminal members and individuals as identified by Nepal Police and of the international police based on the information provided by the Interpol Office.

Highlighting the features of Nepali Port and the latest technology launched at the Immigration, Director General at the Department of Immigration Eshor Raj Poudel said that it was developed making compatible with bio-metric system, provision of Irish camera and finger prints that are based on real time data base system.

UN Commences International Day of Commemoration In Memory Of The Victims Of The Holocaust By NEW SPOTLIGHT ONLINE 7 hours, 19 minutes ago