Additional Financing For Earthquake Housing Reconstruction To Benefit More Than 86,000 Households In Nepal

Additional Financing For Earthquake Housing Reconstruction To Benefit More Than 86,000 Households In Nepal 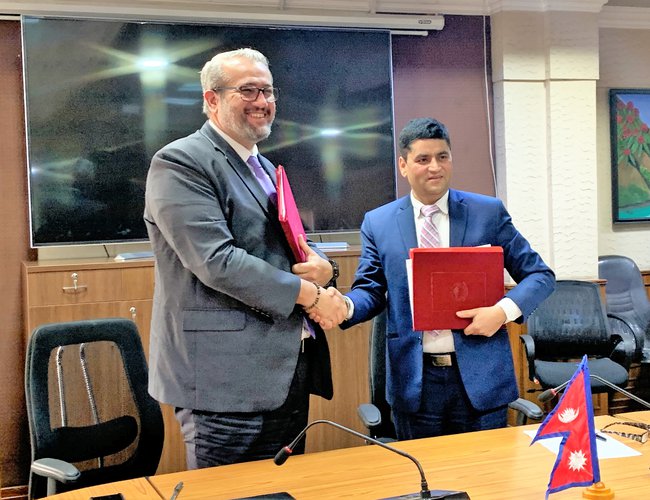 The World Bank approved an additional credit of US$ 200 million (NPR 22.82 billion approximately) for the implementation of the Earthquake Housing Reconstruction Project (EHRP) in Nepal on January 14, 2020. An agreement to this effect was signed by Shreekrishna Nepal, Joint Secretary, Ministry of Finance and Faris H. Hadad-Zervos, World Bank Country Manager for Nepal.

The EHRP and the second additional financing contribute to the Government of Nepal’s umbrella Housing Reconstruction Program (HRP) which aims to rebuild earthquake-resistant core housing units by providing housing grants to eligible beneficiaries who have enrolled in the program. The second additional financing will scale up EHRP’s support to the Government’s HRP by financing reconstruction of an additional 86,680 houses in the 32 districts affected by the 2015 earthquakes.

“The Government of Nepal expresses its sincere appreciation to the World Bank for this assistance and its continued support in the post-earthquake recovery and reconstruction efforts of Nepal,” This Support is instrumental and it will help to achieve the GoN’s commitment to complete individual housing reconstruction by this fiscal year stated Joint Secretary Shreekrishna Nepal of the Ministry of Finance.

“Five years hence, a lasting memory of the Nepal earthquake is that of the resilience of the people of Nepal,” stated Mr. Faris Hadad-Zervos, World Bank Country Manager. “We join Nepal’s development community in continuing support to the Government of Nepal to help families affected by the earthquake rebuild their lives.”

Implemented by the government’s National Reconstruction Authority, the EHRP adopts an owner-driven housing reconstruction approach that promotes earthquake-resistant building techniques and materials and aims at improving long-term resilience through a culture of safer and sustainable housing and settlements. Under the project, eligible beneficiaries receive grants of NPR 300,000 (approximately US$ 2,730) each for reconstruction of houses in compliance with approved reconstruction guidelines in three tranches.

The impact of the earthquakes is estimated at 35 percent of Nepal’s Gross Domestic Product (GDP) with recovery needs of about US$ 7 billion.