Japanese Support For the Capacity Building On Disaster

Japanese Support For the Capacity Building On Disaster 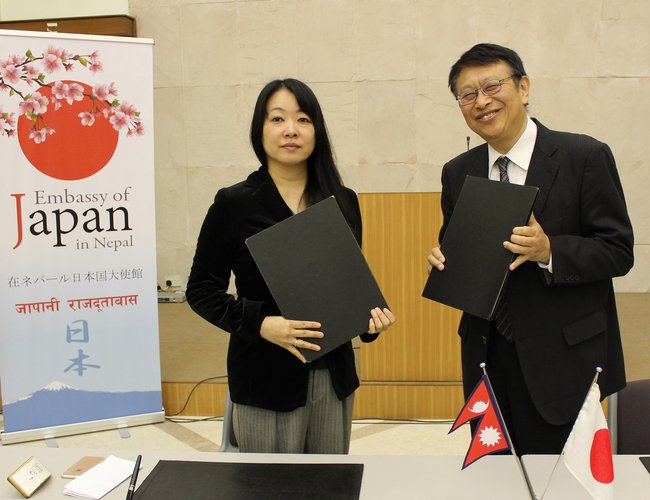 The Government of Japan is extending financial assistance of US dollars 314,912 equivalent to approximately 36 million Nepali rupees, to Japan International Support Program (JISP) under the Grant Assistance for Japanese NGO Projects Schemes. JISP, an international NGO based in Japan, will work with a Nepali partner NGO, National Federation of Youth NGO Nepal, to implement the Disaster Risk Reduction (DRR) Strengthening Project in Kathmandu City.

A grant contract relating to this project was signed and exchanged on 20th February 2020 between Saigo Masamichi, Ambassador of Japan to Nepal, and Yoshida Mayumi, Representative Director, JISP, at the Embassy of Japan in Nepal.

The assistance will be used to strengthen the response and resilience capacity of Kathmandu that is prone to earthquakes and fire.

The project will work in close coordination with Kathmandu Metropolitan City (KMC) and its’ citizens. The project aims to promote community-based disaster prevention activities based on experience and know-how from Japan.

JISP will equip basic rescue goods that can be utilized during emergency evacuation and provide first aid to the beneficiary communities.

It will also support capacity building training for the staff of the Disaster Management Department (DMD) of Kathmandu City, health posts and local schools. Some of the participants will also be trained as trainers so that in the future they can provide training to the community volunteers.

The Embassy of Japan in Nepal expects this project will contribute to improving DRR in the local communities in the Kathmandu Metropolitan City and will also be good practice for DRR in other areas in Nepal. This project will also enhance the cordial friendship already enjoyed between the people of Japan and Nepal.