Temples Shuts Down In India Temples To Contain Coronavirus Outbreak

Temples Shuts Down In India Temples To Contain Coronavirus Outbreak 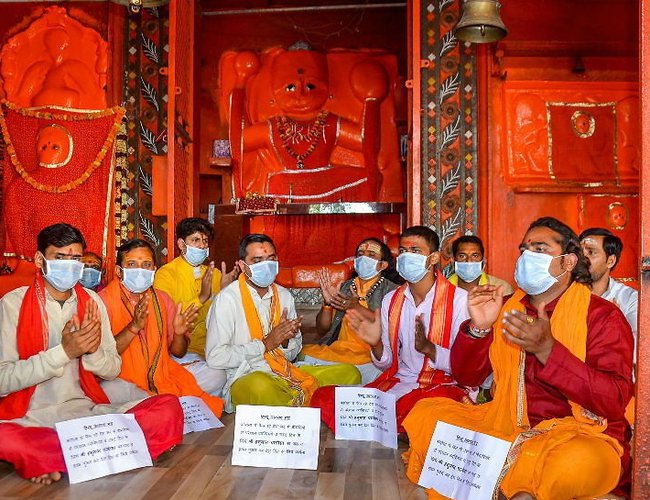 All important religious places in India including Shirdi’s Sai Baba temple, in Maharashtra have decided to shut down until at least the end of March amid growing concerns over the novel coronavirus in the state.

Similarly, Mahakaleshwor in Madhyapraesh, Mata Bashnava Devi Temple in Jammu, Madhurai an many other temples across India shut down.

The temple trusts responded to chief minister Uddhav Thackeray’s appeal to religious places to voluntarily take a call to shut their doors to prevent the novel coronavirus from spreading.

The state has the highest number of coronavirus patients in the country, which has reported 126 cases so far.

Most of these temples attract thousands of devotees every day.

Among the prominent religious places which have closed from Tuesday till next week are the Bhimashankar’s Jyotirling Temple, Gajanan Maharaj temple at Shegaon, four Astavinayaka temples in Pune district and Dehu’s Tukaram Maharaj temple.

“The temple is closed from Tuesday itself and we are issuing an official statement for it very soon,” Mohan Rathod, Shirdi Sai Sansthan’s spokesperson, said.

Arun Dongre, the trust’s chief executive officer, had requested devotees on Sunday to defer their visit to Shirdi for a few days to prevent the spread of deadly coronavirus.

“We too planning the closing the temple by today and received such instructions,” Sanjay Gawande, the Bhimshankar’s temple’s trustee, said.

In Pune, the famous Dagadusheth Halwai temple has already announced its will remain close till the end of this month while in Mumbai Siddhivinayak temple has taken a similar call.

Adesh Bandekar, the chairperson of the Siddhivinayak Temple Trust in Prabhadevi, said while prayers will continue inside temple premises, the temple was shut for devotees from Monday evening onwards until further notice.

“Because the government has given a call that we should avoid crowding at any place, we have decided to keep the temple closed for devotees... It could be closed for 15 days or longer depending on what the government decides,” said Bandekar.

Similarly, Shree Mahalakshmi Temple Charities at Bhulabhai Desai Road and Mumbadevi Mandir at Zaveri Bazaar have also announced that the temples will be closed from Tuesday onwards.

Swasthanibrathakatha To Conclude Today By Agencies 1 week, 2 days ago

Valentine's Day 2021: The significance Of This Day By Agencies 3 weeks, 1 day ago