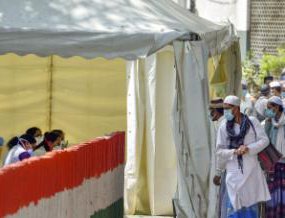 Thirteen Indonesians who had come to Nepal in connection with participating in a religious assembly in Saptari district have been removed from a mosque at Mahalaxmi Municipality here.

RSS reports that it is said the Indonesians had been staying at the Ajijiya Madrasa Masjid, a mosque, at Imadol of Mahalaxmi Municipality since April 1, without informing the municipality authorities during the lockdown period.

They were expelled from the mosque at 4pm on Thursday after the locals from the Mahalaxmi Municipality protested their staying there without reporting to the authorities concerned. The 13 Indonesians were reportedly taken by police to the Godavari Village Resort at Taukhel from the mosque.

According to RSS, the Godavari locals also protested vehemently to this and the 13 Indonesians were taken to an unspecified location from the Resort at 10pm on Thursday.

It is learnt that these Indonesian nationals had arrived Kathmandu on January 21 and had been staying at the Jame Masjid in Kathmandu. They had come as part of the Tabaliki Jamaat, a group of Muslim preachers. They had travelled to Saptari on February 13 and participated in the Ishtima programme at Rupani Bazar of Saptari for three days.

They had returned Kathmandu from Saptari on March 31 and had gone to a mosque at Machhapokhari of Balaju the next day. There also they faced protests from the locals and the police, in consultation with the mosque officials, brought them to the Masjid at Imadol.

Mahalaxmi Municipality mayor Rameshwor Shrestha has called for investigation of individuals or agencies bringing the Indonesian nationals from Saptari to the Mahalaxmi municipality via Kathmandu Balaju at a time when the country is in a lockdown over fears of COVID-19.

Nepal Is Committed To End All Kinds Of Discrimination: Foreign Minister Gyawali By Agencies 2 days, 13 hours ago