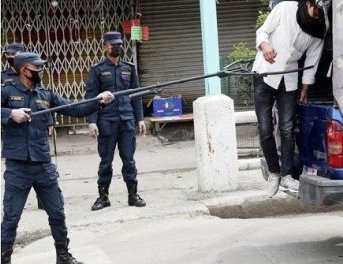 Following the strict implementation by the police in coordination with local community and volunteers, the trend of defying the lockdown in Kathmandu has sharply declined.

Police have been providing the data of the lockdown violators in every 12 hours starting from 6:00 a.m. to 6:00 p.m., Deputy Inspector General and chief at MPO Bishwa Raj Pokhrel said.

On April 15, 3,267 people along with 774 women were nabbed for violating the lockdown, and it was the highest number of people nabbed on a single day of the week reports the daily quoting DIG Pokhrel.

Nepal Airlines To Transport All Vaccines Within This Week From China By Agencies 3 days, 3 hours ago

India Hands Over 150 ICU Beds To Nepal As Part Of COVID-19 Cooperation By NEW SPOTLIGHT ONLINE 6 days, 4 hours ago