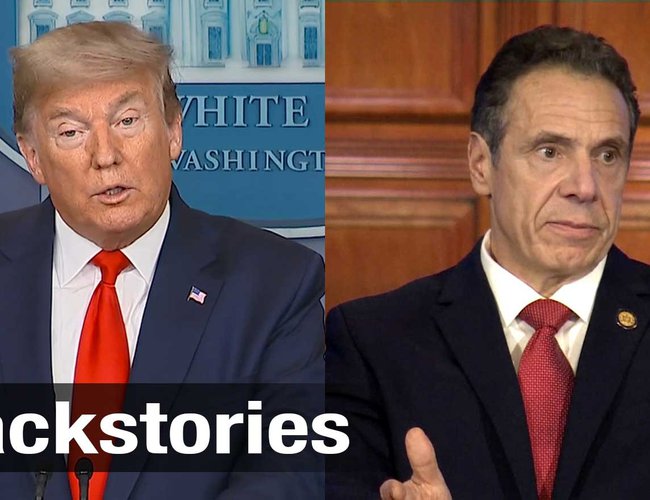 People across America are sheltering at home as the country looks to overcome the coronavirus pandemic with social distancing. This has meant more time to watch television, which has increasingly become the main source of information on COVID-19. President Donald Trump and New York Governor Andrew Cuomo, with their frequent press briefings, have become two of the most visible figures of the pandemic, and they are displaying sharply different leadership styles.NHK Link

Since the White House began its Coronavirus Taskforce press briefings, Trump has seen a noticeable increase in his approval rating. According to RealClearPolitics, he enjoyed a 47.3% approval rating on March 30, a record high since taking office. As of April 15, it stands at 45.5%, while his disapproval rating is 51.1%. Political analysts say presidents tend to see boosts in popularity during times of crisis.

“It’s very ordinary in the United States for members of the public to rally around the President in the time of crisis,” says Adam White, resident scholar at the American Enterprise Institute. “Even people who might be skeptical of the President in more normal times are keen to see him succeed.”

This may at least partially be a result of increased television viewership. According to Nielsen, each cable network received on average 8.5 million viewers each day in late March, the highest viewing levels in more than 15 years. Trump is now more visible to people such as non-voters and independents who would otherwise not have tuned into such shows. His approval rating with these demographics has grown.

Governor Cuomo has also seen a similar surge in popularity. A March 30 poll by Siena College showed he enjoyed an 87% approval rating from New York residents. This is a large jump from just 43% last year. White says the huge bump is a result of increased media exposure. Cuomo’s press conferences highlight the sharp contrast between his leadership style and Trump’s. And in a state like New York where the president is deeply unpopular, this has been good for Cuomo’s numbers.

“Trump has a lot of power in times of emergency,” White says, “but when it comes to day-to-day governance, governors like Cuomo have much more practical power in terms of managing public health issues. A President is very limited in his powers of what he can do.”

Trump’s approach to tackling the pandemic has been largely rhetorical, based around the idea that the virus is an “invisible enemy.” Political analysts believe he wants to adopt the demeanor of a wartime leader and rally the public against the virus. Trump reassures them there will be a resumption of a “roaring economy” if the country comes together to overcome the virus, referring to this as a “tremendous light at the end of the tunnel.”

Trump has also emphasized the role he has played in ensuring collaboration between the different branches of government. He has touted his own efforts in forging the bipartisan cooperation that was needed to pass the $2 trillion stimulus package, expand the Paycheck Protection Program, and ramp up vaccine testing and protective gear production.

“Trump has described himself as a kind of a cheerleader,” says William Galston, a senior fellow at the Brookings Institution. “Focusing on hope, on optimism, on new medicines and new devices that might help the country get through this difficult time.”

William Galston, a senior fellow at the Brookings Institution

But this approach may end up being derailed by his combative tendencies, which have emerged several times during the briefings. There have been tense instances when he has been pressed on scientific questions related to the virus. In the long run, Trump’s confrontational nature may damage the composed wartime leader image he has tried to cultivate during the outbreak, severely hurting his reelection prospects.

On the other hand, Cuomo has adopted a more down-to-earth attitude for his briefings. While he has answered questions related to the virus with information from experts, Cuomo has also spoken about his own family. His brother, Chris, an anchor for CNN, has contracted the virus. Cuomo has made it a point to emphasize that he shares the same worries as most Americans, that he is just as affected by the virus as the people he is addressing.

“Cuomo was seen as sort of cold, calculating, and ruthless,” says Galston. “That’s true. But they’re seeing another side which is focused, determined, warm, personal. And people can see the governor cares about his family. So, they believe the governor also cares about their families. He understands what they’re going through.”

The governor has also been careful not to get embroiled in a political battle with Trump. While he has been critical of the president, he has also commended Trump for responding to his requests and sending immediate aid to New York. Experts say this setting aside of politics has also contributed to Cuomo’s rise in popularity.

Trump and Cuomo will continue to be two of the most prominent figures in America’s fight against the coronavirus. Trump showcases positive certainty while Cuomo displays reassuring realism. Both methods are welcome during this unknown time and so far, despite their wildly different attitudes toward leadership, they have both seen their approval ratings shoot up. It remains to be seen which approach will be more successful in the long run.

Bill And Melinda Gates Announce Divorce After 27 Years Of Marriage By Agencies 6 days, 5 hours ago