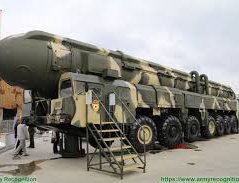 With an expenditure of $732bn, the USA remained by far the largest spender in the world. The next 10 countries on the list spent $821bn combined.

China, the second-largest spender, is estimated to have allocated $261bn for defence — 14 per cent of global expenditure.

Sipri, founded in 1966, is an independent international institute dedicated to research into conflicts, armaments and arms control.

According to Sipri, Pakistan’s defence budget rose 70pc over the past decade. A significant fall in Saudi Arabia’s spending (-16 per cent) over the same period meant that India shot up to the third spot for the first time.

Russia moved up one place in the rankings, from fifth to fourth, while Saudi Arabia fell from third to fifth.

About Pakistan, the Sipri report said its military expenditure had gone up by 70 per cent during the 2010-19 decade to reach $10.3bn. In terms of GDP, the military budget rose from 3.4 per cent in 2010 to four per cent last year.

Six of the 10 countries with a spending of four per cent or more are in the Middle East. Oman spent 8.8pc of GDP on the military — the highest in the world. Close on its heels was Saudi Arabia with eight percent, Kuwait (5.6 per cent), Israel (5.3 per cent), Jordan (4.7 per cent) and Lebanon (4.2 per cent).

World military spending rose in each of the five years from 2015, having fallen steadily from 2011 to 2014 because of the financial crisis.

The world military burden — the global military expenditure as a share of the gross domestic product (GDP) — was 2.2 per cent in 2019, an appreciable rise over 2018.

The top 15 military spenders in 2019 were the same as those in 2018, but there were some significant changes in the ranking.

Japan had the lowest military burden: it devoted only 0.9 per cent of its GDP to military expenditure. Saudi Arabia had the highest at eight per cent.