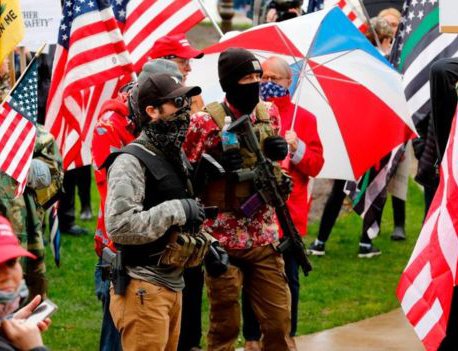 Gun-toting protesters against Michigan's coronavirus lockdown have rallied in the state capitol building.

Hundreds of demonstrators, a few of them armed, gathered in Lansing and many did not wear masks or socially distance.

Police checked their temperatures before some were allowed into the capitol, where lawmakers were debating.

Governor Gretchen Whitmer, a Democrat, extended her stay-at-home mandate earlier this month until 15 May.

Michigan is one of the US states hardest hit by the coronavirus, with 3,788 Covid-19 deaths.

More than 41,000 infections have been recorded across the state, with most found in the Detroit metro area.

Thursday's protest, dubbed the "American Patriot Rally", was organised by Michigan United for Liberty. It called for state businesses to reopen on 1 May in violation of state orders.

It is legal to bear firearms inside the statehouse, and several demonstrators were openly carrying guns in the Senate gallery.

But some armed protesters reportedly tried to enter the floor of the chamber, and were blocked by state police and sergeants-at-arms.

One state senator said several of her colleagues wore bulletproof vests. Footage of protesters outside the building showed them chanting "Let us in!", "Let us work" and "This is the people's house, you cannot lock us out".

"Governor Whitmer, and our state legislature, it's over with. Open this state," said Republican congressional candidate Mike Detmer.

"Let's get businesses back open again. Let's make sure there are jobs to go back to." "The virus is here," one demonstrator, Joni George, told the Associated Press. "It's going to be here... It's time to let people go back to work. That's all there is to it."

The rally is believed to have been the largest of its type since one on 15 April when Michigan protesters sat in their cars in order to create traffic around the statehouse.

President Donald Trump threw his support behind demonstrators at the time, tweeting "LIBERATE MICHIGAN". Some critics said his tweets were an attempt to foment insurrection.

They also cleared the way for her to be sued over her handling of the pandemic. She hit back that she does not need legislative authorisation for the extension. On Wednesday, the governor accused Republicans of treating the virus like a "political problem", rather than "a public health crisis".

Many US states - including Georgia, Oklahoma and South Carolina - have taken steps to loosen virus mitigation restrictions.

On Wednesday, a Michigan court ruled that the governor's lockdown orders were not unconstitutional, as five state residents had claimed in a lawsuit against the governor.

"Although the Court is painfully aware of the difficulties of living under the restrictions of these executive orders, those difficulties are temporary, while to those who contract the virus and cannot recover (and to their family members and friends), it is all too permanent," Michigan Court of Claims Judge Christopher M Murray wrote in a ruling.

No Need For Kids To Be Vaccinated To Attend School: WHO By Agencies 4 hours, 40 minutes ago

Japanese-made AstraZeneca Vaccine To Arrive In Nepal On August 7 And 8 By NEW SPOTLIGHT ONLINE 1 day, 4 hours ago

Allow All Countries To Vaccinate 10% Population: WHO By Agencies 1 day, 5 hours ago

Delta Variant As Contagious As Chickenpox, May Cause More Severe Infection: Report By Agencies 5 days, 6 hours ago

COVID Death Toll Up 21% From A Week Ago: WHO By Agencies 1 week ago

England To Lift COVID Restrictions As Cases Rise By Agencies 2 weeks, 3 days ago