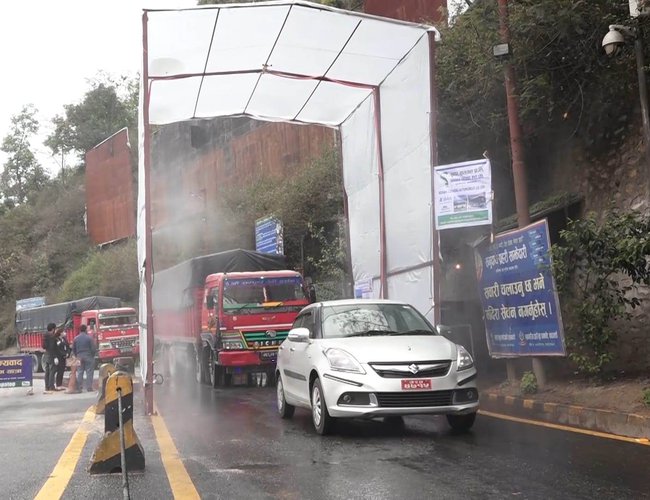 Deputy Inspector General (DIG) of Nepal Police Bishow Raj Pokhrel said that vehicles except the emergency ones are prevented from coming into the Kathmandu valley though they have carried entry pass.

He said that sick people, those traveling for death rituals, emergency jobs and professions are allowed to move to their destinations in the valley reports RSS reporter Narayan Dhungana.

Following the direction of the Ministry of Home Affairs, the police have tightened the security. Despite having the entry pass, the vehicles are not permitted to get through the capital city from border points—Nagdhunga, Pharping, Mudkhu, Jagati and Jarsinghpauwa—except for emergencies. Now, only the vehicles carrying highly essentials goods and health supplies would be permitted to enter the capital city from other districts.

Currently, around 1,500 vehicles have come to the Kathmandu valley every day and of them, 400 vehicles bear the entry pass in the name of different purposes, the police records reveal.

Likewise, the number of vehicles carrying daily essentials has increased lately. Despite the pandemic COVID-19 paralyzing the normal life, the people tend to get the entry pass under different pretexts which have prompted the security officials to be stricter in the entry of vehicles.

The police were obliged to take the step as more entry passes were distributed in the districts resulting in the pressure of vehicles from outer districts.

Nepal Airlines To Transport All Vaccines Within This Week From China By Agencies 2 days, 16 hours ago

India Hands Over 150 ICU Beds To Nepal As Part Of COVID-19 Cooperation By NEW SPOTLIGHT ONLINE 5 days, 17 hours ago