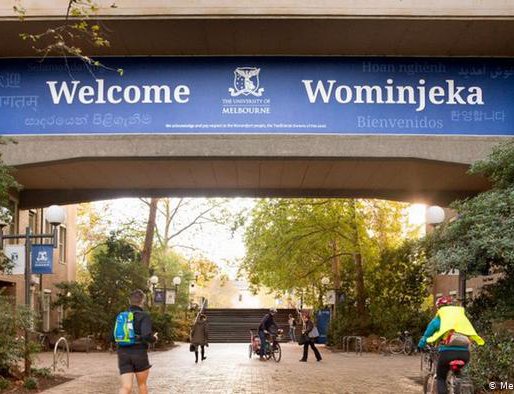 Australian universities are suffering a double blow: First from the coronavirus pandemic and then from Chinese threats of an economic boycott. Foreign students may decide to go elsewhere in the future.

In 2019, international students delivered more than 40% of the total student revenue to some of Australia's top universities and contributed A$37.6 billion (€22.4 billion; $24.2 billion) overall to the Australian economy. Now, amid the global coronavirus pandemic and mounting tensions between Canberra and Beijing, the future of the lucrative industry is at risk.

Analysis by the Mitchell Institute found universities could lose up to A$19 billion over the next three years if Australia's border stays closed to non-citizens for the remainder of the year — something the government has flagged as likely. The loss to the broader economy could be as high as A$60 billion.

Then came the threats from China's Ambassador to Australia, Cheng Jingye, over Canberra's call for an independent inquiry into China's handling of the coronavirus. Cheng told the Australian Financial Review daily last month that the Chinese public is "dismayed" over the push for an inquiry. "Maybe the parents of the students would think whether this place, which they find is not so friendly, even hostile, is the best place to send their kids."

In response to the ambassador's threats of "economic coercion," former Foreign Minister Alexander Downer told the Australian Broadcast Corporation: "It's just a completely absurd proposition. We're not going to be bullied by an ambassador who's gone rogue in Canberra."

While the government has said opening the border will be the last restriction to lift, it has flagged the possibility of allowing charter flights to bring international students stranded abroad back into the country under strict quarantine measures.

Catriona Jackson, the CEO of peak higher education body, Universities Australia, said universities welcome the proposal but are approaching it with caution.

"You can't just turn off access and turn it back on again. You need to make sure students are both ready and understand what their options are," she said. "If it happens sooner rather than later, that is of course a good thing, but expert medical advice will be guiding all our actions." 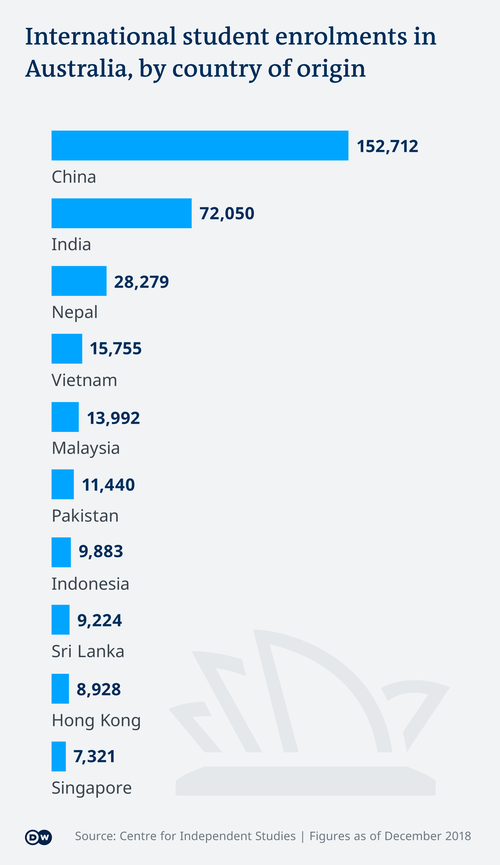 A survey published in February by the Education Consultants Association of Australia found that nearly a third of the 100,000 Chinese students enrolled in Australian universities but stuck in China, were considering studying in another country as a result of the uncertain situation.

Ruby Hao, a 23-year-old Chinese student in Sydney, said some of her friends in China would consider studying elsewhere if they hadn't already given so much to their Australian education. But for future students, she said, that loyalty might not be there.

"Some people have apartments and things they have to return to. They will have to come back," she said. "But there's potential students looking into how the government is responding and how the education sector is supporting international students. There will be serious reflections on all of that."

A report published last year by theCenter for Independent Studies at Sydney University identified nine potential risk factors that could adversely affect Chinese student numbers in Australia. One risk being political confrontations between Canberra and Beijing. The author, Adjunct Scholar Salvatore Babones, claims universities were aware of the risks but did little to mitigate them.

"They have surfed the wave of increasing Chinese enrollments without a life jacket on," he said. "They've just taken their chances the wave would go on forever. That's why we're seeing this enormous crisis now."

Babones has not been alone in raising the alarm on universities' dependence on Chinese students. In late February, Senator James Paterson told Parliament that the government should not relax restrictions, nor should it bail out universities.

"I'm very sympathetic about the impact on tourism and farmers, but I'm much less so with the universities," he said. "They have been warned for years they are over-reliant on the Chinese market, and for years they've reassured us it was all fine, and if anything happened, they'd be able to withstand it. They rode the cycle up, now they can ride the cycle down."

Rhythem Vatsa, a 22-year old from New Delhi, India, is supposed to be in Melbourne starting her master's in marketing at RMIT University but instead she's still at home and has begun researching universities in Canada.

"I still want to go to Australia but I'm not going to wait another six months. If the border remains closed then I will apply to Canada," she said, adding "I am in a student Facebook group and everybody has this concern. I think 70% to 80% are thinking about deferring their admission or studying somewhere else."

Rhythem said she would probably not take the government charter flights if they were to go ahead given the public health risk of such an undertaking.

"Even if the situation in Australia is safe at the time and they are only allowing international students in, thousands of interactions will happen in that process and it might increase the coronavirus cases," she said. "We will all be traveling from different countries and even if we take all the measures, it's just not safe."

Tapping into other markets

According to Catriona Jackson, universities have already taken a A$3 billion to A$4.6 billion hit due to the loss of international students.

"And the revenue hits aren't just this year," she said. "They're next year and will continue for quite some time. But we are really hoping the research system and education system here is not damaged permanently. We are hoping we will be able to maintain the world class reputation our universities have." 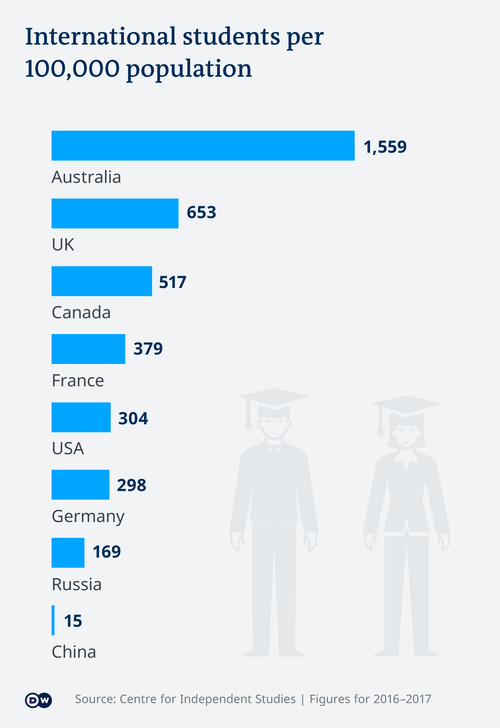 One way universities have tried to reduce their dependence on Chinese students and may look to as a means for recovering losses is by accessing other student markets. In 2019, many universities announced "India strategies" through which they hoped to prolong the international education expansion, but Babones believes the India market is already over-tapped.

"By my calculations, India [only] has about one eighth as many families who can afford an international education as China," he said. "But India already has as many students studying abroad. By 2019, we had already reached 'internationalization max.'"

Colin Powell Dies Of Covid At 84 By Agencies 2 days, 13 hours ago