Whether one third or two thirds or absolute majority, Nepal’s political instability has no end. The ongoing feud in ruling NCP is another drama in the sequence 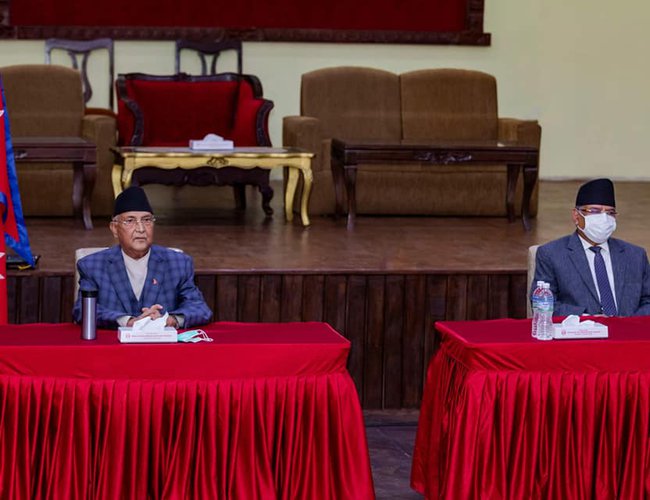 As veteran Russian communist leader and revolutionary Vladimir Lenin had said, to emerge in the power struggle, a successful revolutionary cannot spare time to divide the rivals into several factions so that they can never challenge the power.

Lenin, in his collected works, describes various strategies to capture and control the power in the name of people. Whether it was just a coincidence or otherwise, Prime Minister K.P. Sharma Oli, who has recently gone through a successful second kidney transplant, is also able to weaken his rivals in the party.

As Lenin said, Prime Minister Oli offered positions to those who had the lust for it. He used the individual threats to those who declined to bow down before him. His strategy worked.

At a time when his rivals Pushpakamal Dahal, Jhalanath Khanal and Madhav Kumar Nepal, with support from Bam Dev Gautam, came together to force him out, Prime Minister Oli tactfully lured Gautam and General Secretary Bishnu Poudel to his fold.

“Vladimir Lenin is my source of inspiration,” said Prime Minister Oli, issuing a statement on the birth anniversary of Lenin. His ideals motivate and inspire me to complete the unification of the party.”

Known for his cunningness to play politics, Prime minister Oli, despite his health, has proved to be a master player within his party and outside. He was also able to tranquilize the main opposition party.

At a time when the country has been fighting the global pandemic COVID-19, a power struggle erupted in the ruling NCP, which is undergoing a strenuous merger, pushing the country into a new phase of political uncertainty. After a series of meetings and negotiations, top leaders agreed on a truce.

However, it broke out in less than 24 hours, indicating a prolonged political crisis ahead. Although power struggle within the ruling NCP has been going on for a long time, the warring factions publicly came out just recently.

Although his first strategy did not work, Prime Minister Oli continues to annoy his rivals in the party with his own strong base.

With almost sixty percent of the support, the Prachanda-led group is capable to unseat PM Oli. Knowing this, he has been luring the leaders of factions, using carrot and stick. His strategy worked initially but it was just short-lived.

As the session of House of Representatives is on, prime minister Oli has enough time to linger on with the current stalemate. Averting the meeting of the standing committee for an indefinite period, PM Oli had a political respite.

Although no leader publicly said anything about it, the meeting of the Chinese ambassador to Nepal Hou Yanqi, who paid a courtesy call to Prime Minister Oli, Co-chair Prachanda and former prime minister and leader Nepal is also taken as a significant part of the new situation.

Following the declaration of Nepal as a republic, China has been competing with India, which used to have monopoly influence in Nepal before 2006. Chinese ambassador visited the leaders just seeking their support in fighting Covid-19 and moral support against recent U.S. accusations.

As the ceasefire reached between the prime minister and feuding parties broke out, nobody was certain where Nepal’s fragile political process would go now. In this context, it looks the truce is the beginning of the end.

Soon after the decision to vacate a safe constituency for vice chairman of Bam Dev Gautam from Palpa Constituency No 1 paving the way for his entry to the House of Representatives, seating member from the constituency Dal Bahadur Rana has objected in his tweet saying that there is no question to resign.

He said that there is a conspiracy in the party to create another feud. MP Rana has made it clear that no leader had told him anything about it. “Our leaders agreed to unite the party following confession on their role.”

After Prime Minister Oli and party Co-chair, Prachanda confessed for their mistakes of handling their respective roles in the government and party, the meeting announced to move ahead united.

Secretariat member and party Spokesperson Narayan Kaji Shrestha said that the secretariat also decided that the government would follow the party’s directives and strive to achieve the goals of socialism.

Although the feuding group agreed on a truce, they damaged the party’s posture weakening the government’s own position.

POLITICS No Magic Number By Keshab Poudel 2 weeks, 6 days ago

New Government Is Impossible Till Maoist Pull Out From The Government;: NC President Deuba By Agencies 2 weeks, 6 days ago

Prime Minister Oli Calls For Support From All Sides To Tackle COVID-19 By Agencies 3 weeks, 1 day ago