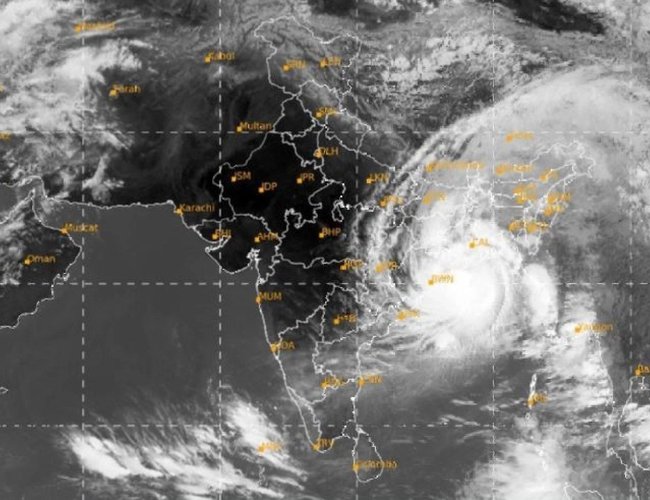 Indian Meteorological Department has said Cyclone Amphan has begun the landfall process, which is expected to last up to four hours. Cyclone Amphan, cramming high-velocity winds, is approaching land close to Sundarbans between West Bengal's Digha and Bangladesh's Hatiya Islands. It is now on the way to Bangladesh.

The wind speed during the landfall of Cyclone Amphan is expected to be 165-170 kmph gusting to 190 kmph. While cyclone Amphan has weakened into an extremely severe cyclonic storm, dumping heavy rains in several parts of Odisha and West Bengal, it still carried enough force to pulverise coastal districts of the two states.

It is the second super cyclone on record that has formed over the Bay of Bengal. Amid fears of heavy damage to houses and crops and disruption of road, rail and power links, the West Bengal and Odisha state governments on Tuesday evacuated lakhs from vulnerable areas. IndiaToday.in is tracking and running live news updates on Cyclone Amphan, stay with us.

Amphan had weakened from a super cyclone to an "extremely severe cyclonic storm" yesterday, causing strong winds and heavy rain in parts of Odisha and Bengal as it advanced towards the Indian coast.

The cyclone still packed a wind speed of 160 to 170 km/h along with gusts of 190 km/h, and made landfall at the Digha coast in East Medinipur district on the Bay of Bengal at around 2.30pm local time, officials said.

The cyclone's impact was felt in Kolkata as medium to heavy rainfall -- several trees and electric poles were uprooted, causing a power cut in vast swathes of Kolkata.

Continuous downpour since the early hours of Thursday led to waterlogging of some streets and low-lying areas of Kolkata as well.

North 24 Parganas and East Midnapore districts, which are in the path of the cyclone, also happen to be two Covid-19 hotspot districts in West Bengal, and have a high prevalence of positive cases.

Generally Cloudy In The Hill Areas Across Nepal By NEW SPOTLIGHT ONLINE 10 hours, 47 minutes ago

Weather Update And Forecast For February 25 Across Nepal By NEW SPOTLIGHT ONLINE 1 day, 11 hours ago

Weather Update And Forecast For February 24 Across Nepal By NEW SPOTLIGHT ONLINE 2 days, 11 hours ago

Weather Update And Forecast For February 21 Across Nepal By NEW SPOTLIGHT ONLINE 5 days, 10 hours ago

Partly Cloudy In Bagmati And Gandaki By NEW SPOTLIGHT ONLINE 6 days, 11 hours ago